Yesterday saw parts of Vellore, Tiruvannamalai, Kanchipuram districts get some moderate thunderstorms along with parts of Karnataka & AndhraPradesh. Some of these storms reached south of Chennai giving places like Kelambakkam some rains after midnight.  But overall the thunderstorm was not as widespread & intense as the say Monday or Tuesday on account of lesser pronounced wind instabilities.

Due to poor steering winds so far coastal areas have not been getting the impact of the thunderstorms.  The interior places alone have been benefiting from it with possibly most of the storms staying stationary.  Today also we could see slow steering pattern but compared to yesterday there is a more pronounced Mid Level Wind Instability around the Tiruvannamalai / Krishnagiri / Villupuram / Cuddalore districts which could trigger some thunderstorms around the Broken Eastern Ghats of Jawadhu / Kalvarayan Hills. 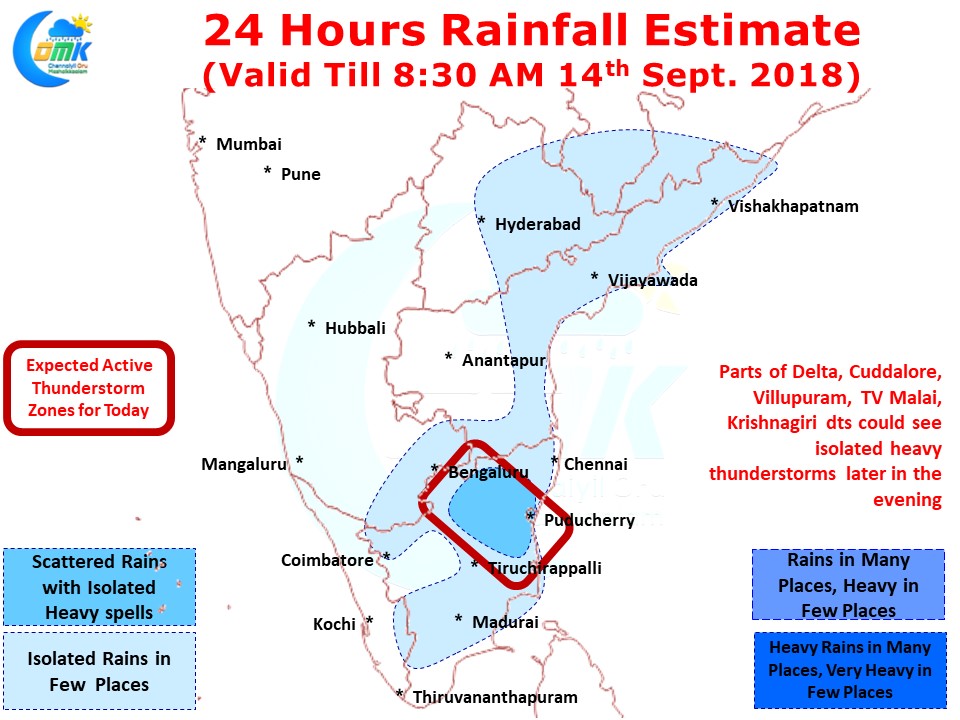 If the wind pattern improves marginally later in the night as some of the models are estimating these thunderstorms could move towards the coast bringing heavy spells of rains to isolated placed between Marakkanam & Delta districts.  We could also see some thunderstorms intensify as it nears the coast which could mean one or two places could witness intense sound & light show around this region.

As things stand going by how models are estimating the wind instability the bulk of the action is likely to be SW of Chennai.  With the steering winds likely to be NW to SE tonight the chance for Chennai to catch up the heavier thunderstorms are less likely unless the “Zone of Instability”  shifts slightly North.  We could possibly catch some light rains in a few places if some remnant thunderstorm from the Rayalaseema region makes its way towards the coast.