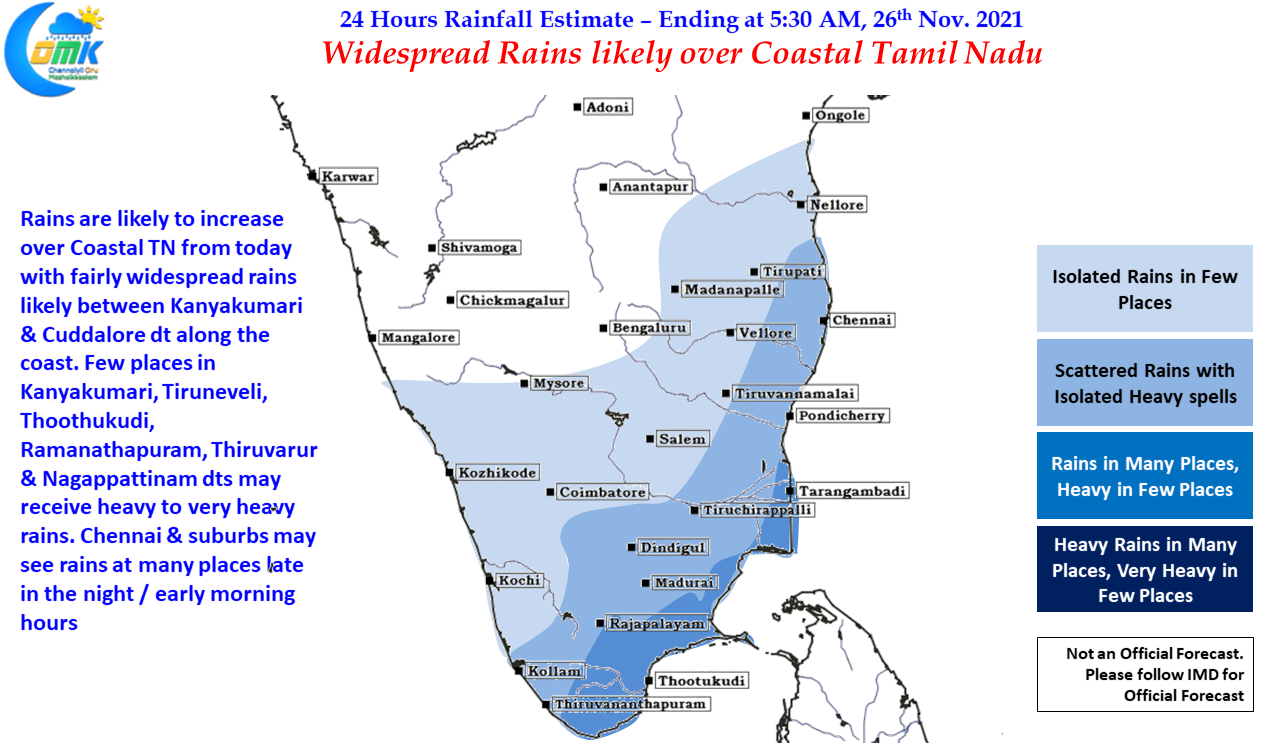 There comes a time when one needs to accept Weather in the Tropics is beyond our understanding & even with the best available tools it may be difficult to give a clear update on what can happen a couple of days down the line. During those times it may make sense to accept the ever changing dynamics and make an fair attempt to give a meaningful update in the short term context.

In the current context with a lot of factors in play it may not make sense to look beyond 24 hours so for the next 4 / 5 days our daily weather updates will focus only on what to expect for the day. But a word of caution before we move onto “What to expect for the day?” Possibly until 1st / 2nd of December Coastal Tamil Nadu & South Coastal AP needs to be wary of heavy to very heavy rains, depending on localized conditions few areas are going to get extreme rains as well at times so keeping a constant watch on the evolving conditions & a tab on the radar image may be prudent.

The circulation off the coast of Sri Lanka continues to persist though it has not yet become an Low Pressure Area contrary to expectations yesterday. But the circulation has certainly started to recycle moisture over the coastal areas of TN with moderate rains seen over Delta districts & some isolated heavy rains seen over parts of South Coastal TN yesterday. Today early morning parts of South Chennai & Southern suburbs saw light to moderate rains at many places.

Ensembles continue to indicate a strong possibility for a WML / Depression to form off the coast of Sri Lanka & move along the Eastern Coast of Sri Lanka. With diverging scenarios developing post 48 hours including the arrival of a fresh pulse into Bay of Bengal from South China Sea complicating the overall scene we could possibly see the dynamics change within a day also. But overall we are likely to see a broad low in a couple of days time that could spread from Arabian Sea to NE of Sri Lanka with two different vortexes. It remains to be seen which of these vortex would take the upper hand subsequently.

As far as rains go for today coastal areas may see widespread rains with places between Kanyakumari & Delta coming under moderate to heavy spells. Few places in Ramanathapuram, Thoothukudi, Tirunelveli & Kanyakumari districts may see heavy to very heavy spell of rains at times. Depending on the convergence of winds one or two places in North TN may see heavy rains later in the evening. Chennai & suburbs will slowly see increased rains from later tonight / early tomorrow morning.