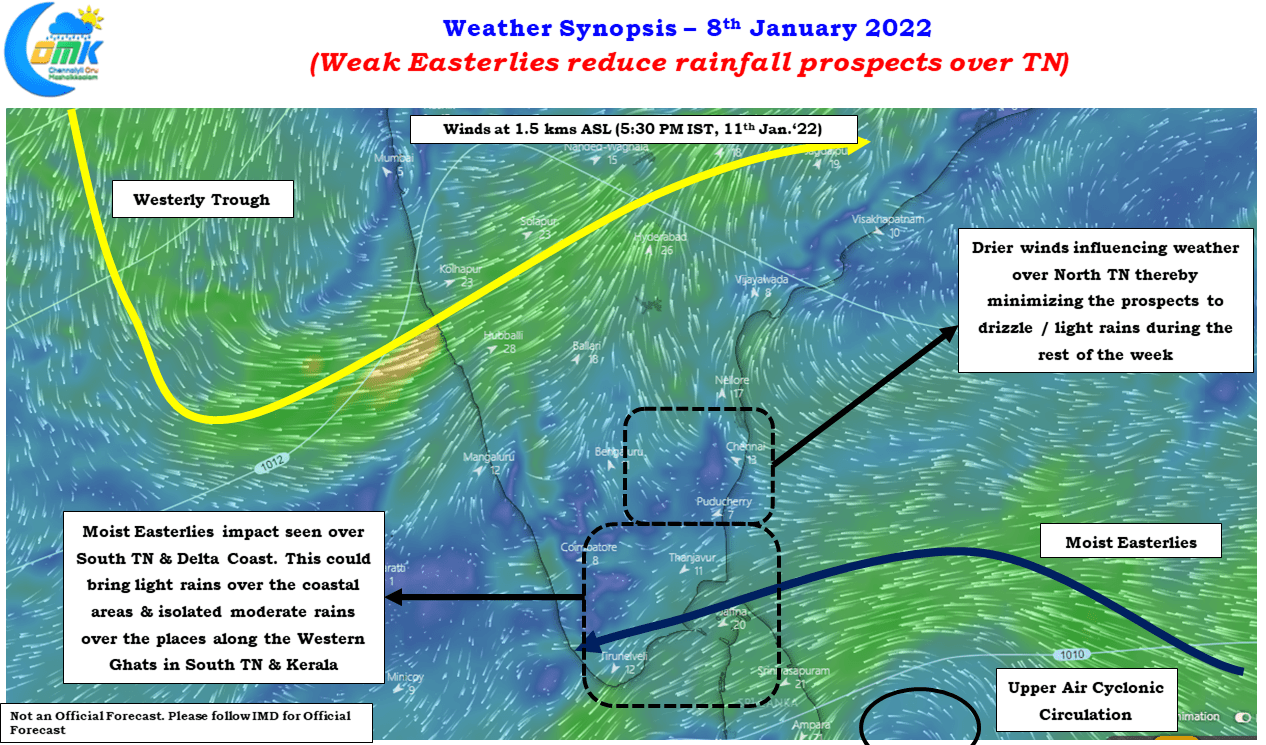 A couple of seasons back the promo for the popular Tamil Reality Show, Big Boss Tamil raised a question நல்லவர் யார் கெட்டவர் யார்??. எல்லாமே நம்ம பார்க்கிற பார்வையில் இருக்கு, the answer, Kamal Hassan the host of the show, gave possibly is applicable to Western Disturbances as well during Northeast Monsoon. A week back an interplay of Western Disturbance in the form of an incoming Westerly Trough and an Easterly wave brought an extreme rainfall episode around Chennai & suburbs with widespread rains seen over most parts of Coastal Tamil Nadu bringing a lot of damage to crops that were getting close to harvest.

This week once again there is an interplay of an incoming mid level Westerly Trough & lower level Easterlies had the possibility to potentially create another episode of widespread rains with heavy rains over coastal areas of Tamil Nadu bringing forth another round of misery on the farmers awaiting the right window to harvest their crops after the completion of Pongal festivities. But in an ironical twist a stronger Western Disturbance has managed to distrupt the Easterly winds sufficiently enough to push back most of the moisture onto Bay of Bengal reducing the prospects of widespread rains over Coastal Tamil Nadu.

One of the strongest western disturbances which had the trough descend down to the lower levels of atmosphere creating temporary westerly winds over even altitudes as low as 3 kms above MSL which normally see Easterlies at this time of the year. This strong dip in the westerly trough not only is pushing back the lower level Easterlies but is also not allowing the upper air cyclonic circulation to the SE of Sri Lanka to move in a NW direction towards Peninsular India instead it is getting dragged along with the trough in a NE Direction further away from the Peninsular Coast thereby reducing the rainfall prospects in the coming days.

While we cannot rule out rains completely over Coastal Tamil Nadu the magnitude of the rains may not be threatening like that of end December episode. Except for a few places the rains are unlikely to disrupt the harvest schedule as well with mostly dry weather likely to happen from middle of next week which is also likely to coincide with the harvesting window preferred by most farmers including Delta districts.

To answer the question in today’s post we go back to another iconic dialogue from the movie Vishwaroopam by Kamal Hassan a few years back.