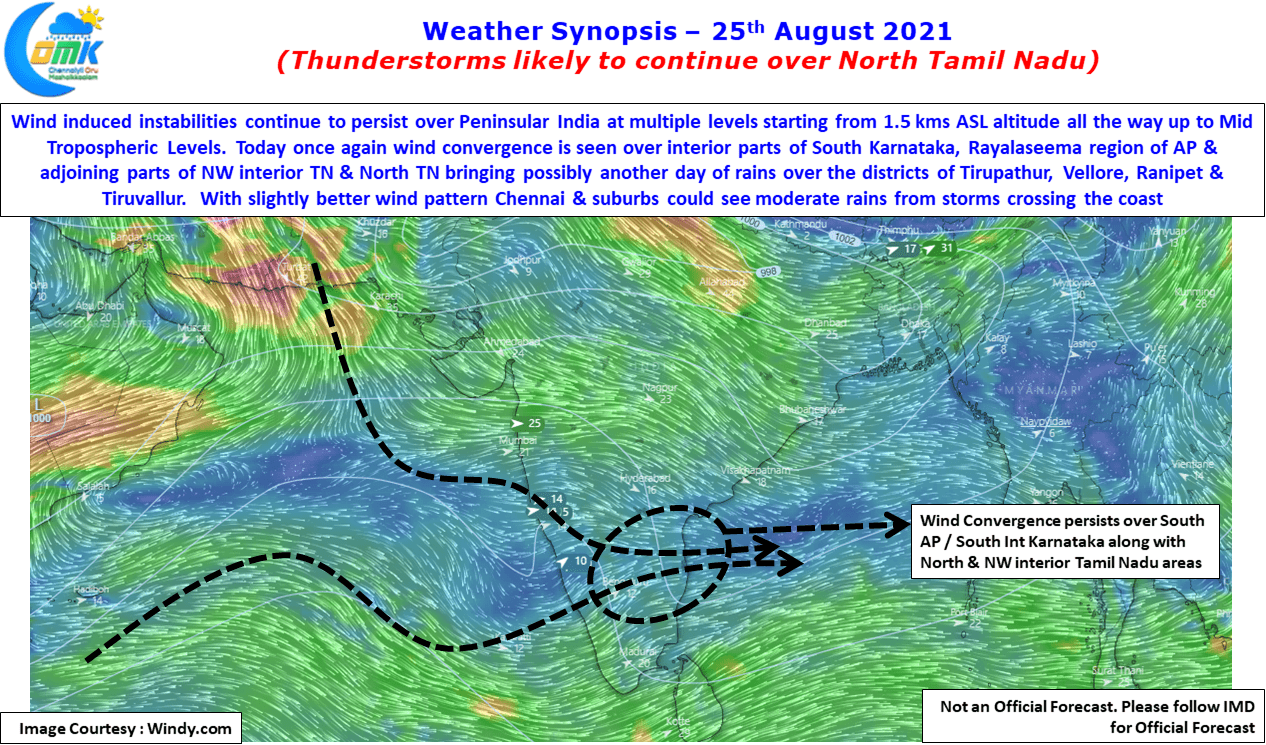 During the wee hours of Wednesday the northern suburbs & western suburbs of Chennai along with a few parts of the city like Villivakkam, Anna Nagar came under moderate thunderstorms in an indication of changing wind support for coastal areas like Chennai. For the past couple of days coastal areas were under an area of unfavorable wind support due to which interior storms were not reaching the coast & in some cases were actually moving from East to West. While today’s early morning storms may not have benefitted most of Chennai, IMD Observatories at Nungambakkam & Meenambakkam recorded 0.6 & 2 mm respectively, it indicates the change in wind pattern for what promises to be a good couple of days of thunderstorm activity not only for Chennai but many parts of Tamil Nadu until weekend.

Weather models indicate wind induced instabilities to persist for the next few days at many levels making it conducive for thunderstorms to develop and sustain for longer period of time. Additionally with no major synoptic support for Monsoon Peninsular India is under fairly clear skies allowing the convective process also to develop during the day in the interior parts of Peninsular India. This could mean overall improving prospects for Tamil Nadu to enjoy a couple of days of scattered to fairly widespread rains through thunderstorms until possibly weekend as of now. As of now looking beyond the weekend may not make sense keeping in mind possibly influence by possible tropical wave movement over Indian Ocean.

The early morning storms that reached parts of Chennai give an indication storms could start moving once again from West to East. With wind convergence seen between 1.5 kms ASL & 3 Kms ASL altitudes all the way from South Interior Karnataka to Chennai coast roughly between 12.5 N to 14 N Latitude there is a very good chance for Chennai & Suburbs to catch up a good spell of rains later in the night while the interior areas could possibly benefit from thunderstorms during the late evening hours. While today’s rains may stay along the districts of Krishnagiri, Tirupathur, Vellore, Ranipet, Tiruvallur, Kanchipuram & Chennai from tomorrow we could see more parts of Tamil Nadu come under thunderstorms with Friday & Saturday promising to be fairly good days of rains across large parts of the state.