Northeast Monsoon has gone into a suppressed phase over Tamil Nadu as estimated by most models.  Yesterday most of Tamil Nadu was dry with no noticeable rainfall activity seen.  Today  morning’s satellite image shows a clean slate with not even the convection typically seen along the Coastal areas when Easterlies hold forte. 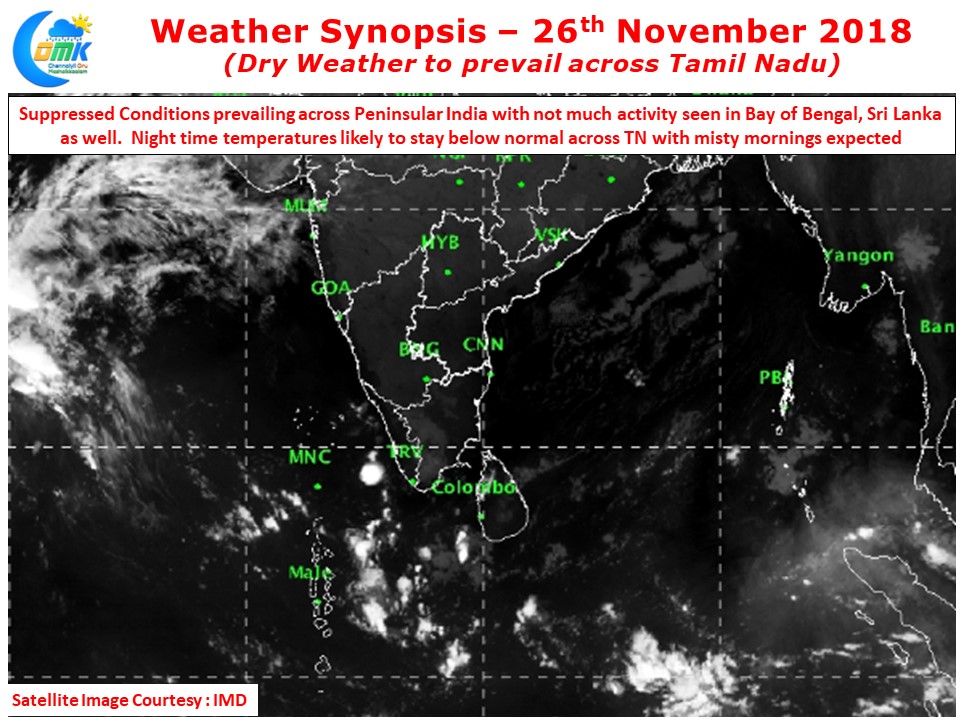 Not only most of Tamil Nadu is dry things don’t look great across Bay of Bengal & Sri Lanka as well with very little convection seen in the Equatorial waters of Bay despite the presence of an Upper Air Cyclonic Circulation close to Sumatra Coast that extends up to 4.5 kms above mean sea level.  This pretty much sums up the suppressed conditions prevailing across North Indian Ocean basin with unfavorable MJO phase seen.  Whether the expected weak disturbance as estimated by models towards end of this week / early next week will make a clear difference remains to be seen. In this context the weekly NEM chase card becomes more critical with both Chennai observatories requiring more than 3 times the normal rainfall expected for this time of the year to reach annual Normal. In an interesting observation one can see delta observatories like Karaikal, Nagappattinam that actually did not see a progress during the week that saw Cyclone Gaja  has benefited a lot from last week’s Well Marked Low.  Karaikal, Nagappattinam, Pamban and Parangipettai made progress during the week with the first 3 now requiring less than the average rainfall for the rest of the days to reach Annual Normal while Parangipettai requires little more than normal to reach the annual total.