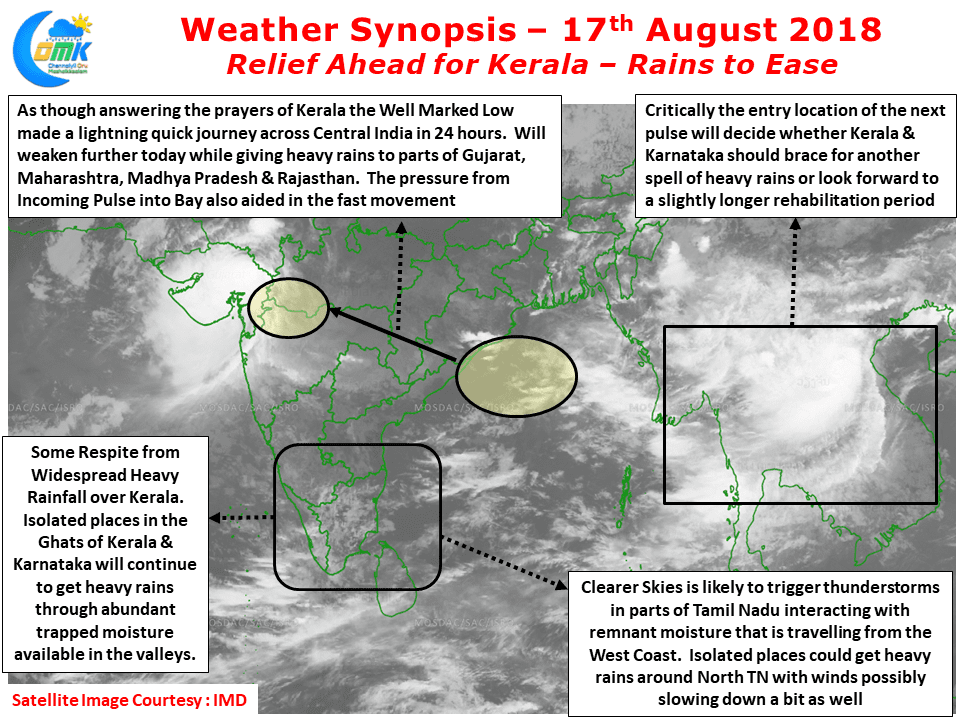 After battering for nearly a week Rains in Kerala seem to relent since midnight which should be a welcome news for not only the common people but also those involved in the relief and rescue missions across the state risking their lives. The magnitude of this disaster is so big in possibly the first instance the COMK weather blog has given two continuous days of daily weather posts for a place outside Tamil Nadu. As though answering the prayers of those affected by Rains in Kerala the Depression weakening into a Well Marked Low made a quick dash across Central India thereby limiting the prospect of heavy rains continuing into the weekend. As things stand widespread heavy rains in Kerala will take a break. There can never be a case of no rains in Kerala during Southwest Monsoon season hence light rains are likely to continue. Also one needs to watch out for the abundant moisture that is likely to be remain trapped in the various valleys of Western Ghats, this would develop into thunderstorms as the sun shines during the day to give bursts of heavy rains in isolated places.

It appears places like Kodagu also could see some reduction in rains looking at how things are evolving since early morning. But the one that needs to be watched out is the disturbance lying over Southeast Asia which possibly played its role in pushing across the current Well Marked Low faster across Central India. Depending on where the pulse from this disturbance enters into Bay of Bengal and develops as a Low Pressure Area we could see a slightly longer reprieve or return of heavy Rains in Kerala & rest of West Coast. We will keep a close watch on it and update possibly tomorrow on what could be the inference. With sun shining clearer across many places in Tamil Nadu there is abundant remnant moisture that has crossed the Western Ghats during the Monsoon surge over the past couple of days. Winds are also likely to weaken a bit compared to the past few days allowing thunderstorms to develop through the interplay between convective day time heating and remnant moisture in the atmosphere. This could give afternoon / evening thunderstorms in a few places while one or two places in North TN could get heavy spells. Also there could be slight wind convergence at upper levels over South AP / North TN which place gets benefited from this convergence is difficult to say at the moment.