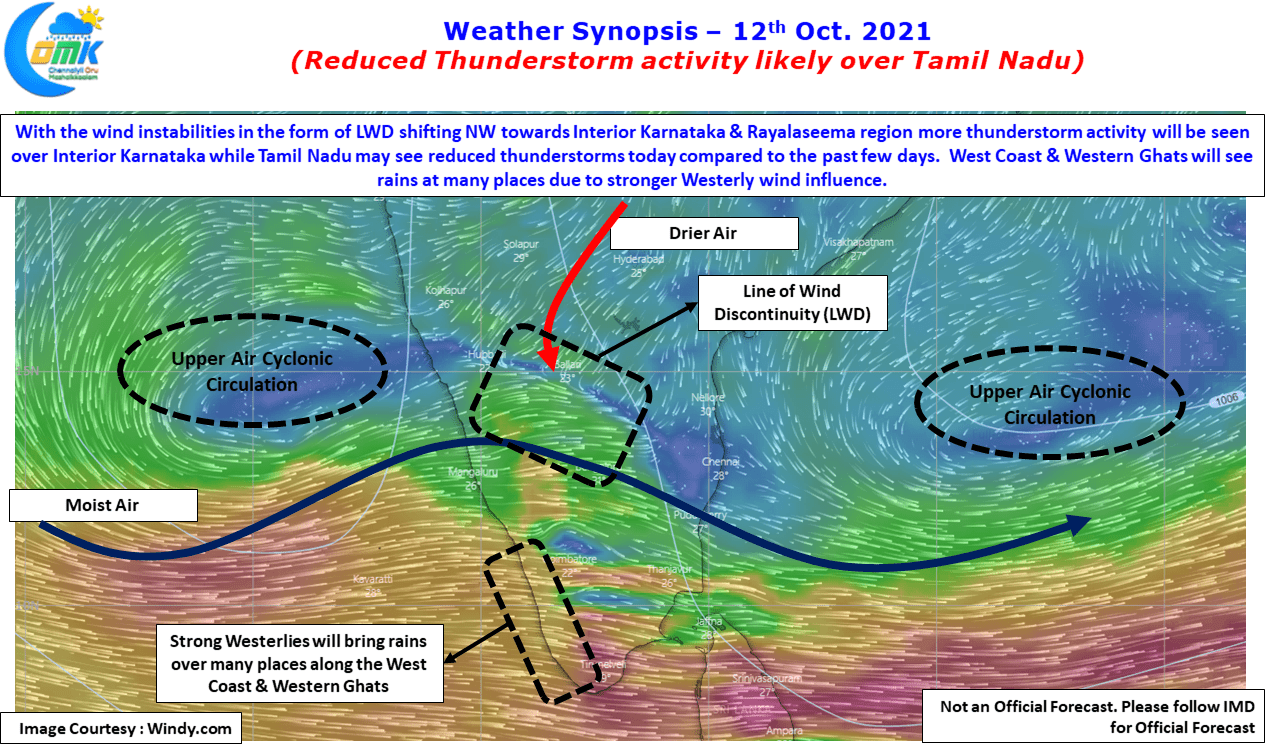 Yesterday once again saw fairly widespread thunderstorms over many parts of Tamil Nadu with moderate to heavy rains reported at many places. Tirukkoilur reported more than 4 cms of rains in just 30 minutes while Ariyalur recorded nearly 9 cms for 2nd straight day accumulating 173 mm in two days. Good rains were reported from Northwest Interior Tamil Nadu as well with Hosur recording 4 cms while Vrinchipuram KVK in Vellore district recorded 43 mm until today morning. It was interesting to note parts of South TN also recorded good rains due to strengthening Westerlies with both Nagerkoil & Tirunelveli recording more than 2 cms of rains influenced by Westerly winds.

IMD announced further withdrawal of Southwest Monsoon which has now pretty much withdrawn over all of North India along with many parts of Central India & also vast majority of Bihar, Jharkhand in East India. Most parts of MP & Chhattisgarh has also seen Southwest Monsoon withdraw. The crucial question now that will possibly come up is while East India & NE India may forego Southwest Monsoon soon will West Coast decide to hold onto Southwest Monsoon for a little longer like a school kid not wanting to release its mother’s hand on the first day of the school

Today though it appears thunderstorm activity over Tamil Nadu could reduce due to the shifting of the atmospheric instabilities further NW towards Interior Karnataka & adjoining areas of Rayalaseema region. With two circulation seen on either side of Peninsular India the region is very active with scrambled winds triggering widespread atmospheric instabilities the source for thunderstorms over many places. Weather models indicate a Line of Wind Discontinuity to be present over Karnataka & adjoining areas of Rayalaseema today at lower levels which could trigger thunderstorms.

Crucially for most parts of Tamil Nadu the wind pattern at lower level is more streamlined Westerlies which is likely to increase the rainfall over many places of West Coast & along the Western Ghats. The strengthening Westerlies mean Tamil Nadu may reduce thunderstorms over the state in the absence of proper instability. Few places in Krishnagiri & Dharmapuri district adjoining South Interior Karnataka may see heavy spell of rains while Chennai & Suburbs may see light to moderate showers in a few places.