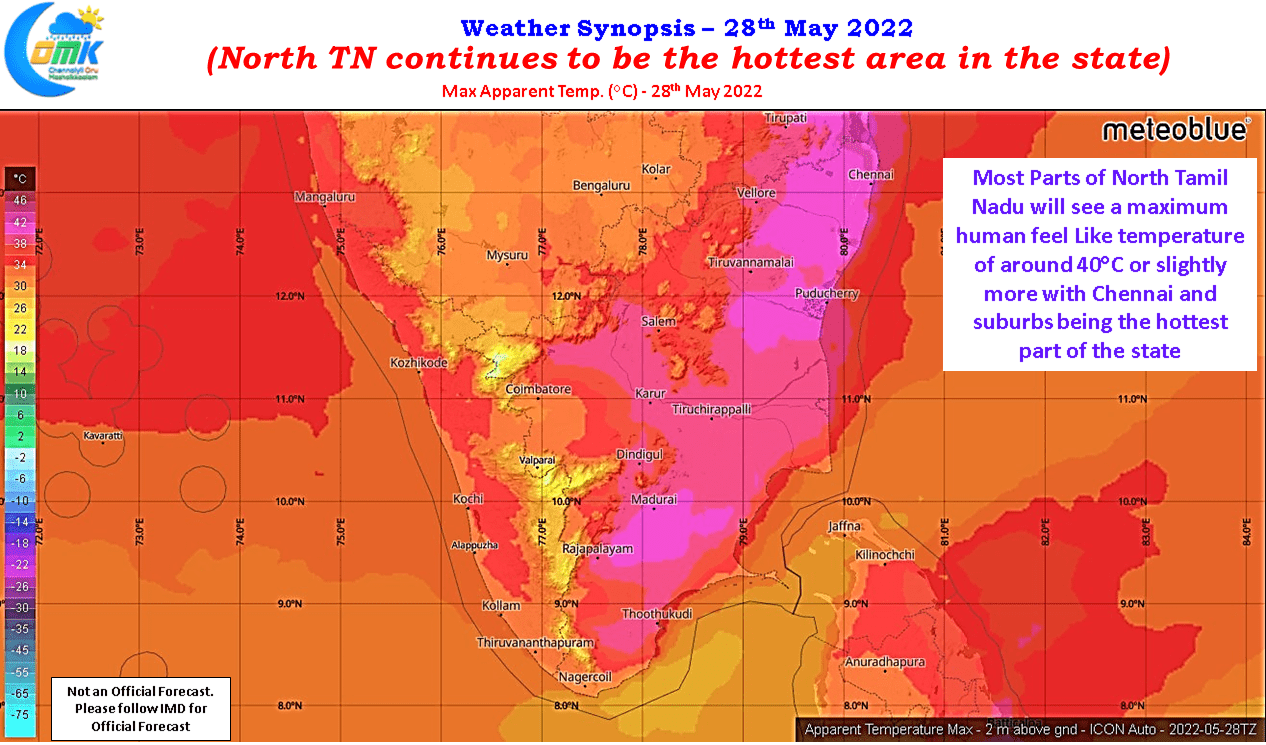 Today is the last day of what is considered as the hottest period of the year in the traditional Panjankams, more commonly known as the Kathiri Period. The talk among most common people over the past couple of days, particularly around North Tamil Nadu, is Kathiri Veyyil time is coming to an end so temperatures should reduce from now on. Ironically the hottest 3 days of the year for Chennai AP was recorded in the last 5 days including the only two occasions when max temperature crossed 40ºC. With weather models indicating North Coastal Tamil Nadu to see slight increase in temperatures it could effectively mean the hottest period of the year for Chennai and suburbs could effectively happen after the Kathiri period.

While we continue to stay on the temperature front in a slight change in the way weather synopsis is being presented as maps we will be using Maximum Apparent Temperature as a way to show potential day time weather conditions as they are better representation of how humans feel. Apparent temperatures not only take into account surface temperatures but also humidity and wind so that they represent the on ground situation better. For example while the maximum temperature around Chennai and suburbs may stay a tad lower than 40ºC the maximum feel temperature might be a couple of degrees higher than that due to additional humidity which coastal areas by default see.  Also if one observes the map most parts of Tamil Nadu excluding possibly the west interior TN areas see Maximum Apparent Temperature around 40ºC or more though the actual surface air temperatures may not be touching 40ºC in all the places

Weather models indicate wind instabilities to slightly reduce from today over Peninsular India which could shift the thunderstorm near Dindigul dt and surrounding areas. While coastal areas like Chennai owe a lot to the intrusion of sea breeze for the development of thunderstorms it appears so the westerlies might be slightly stronger for the sea breeze to make a firm intrusion inland over North Coastal TN. Strengthening westerlies could also mean few places in the West Coast and the Ghats may see heavy spell of rains.