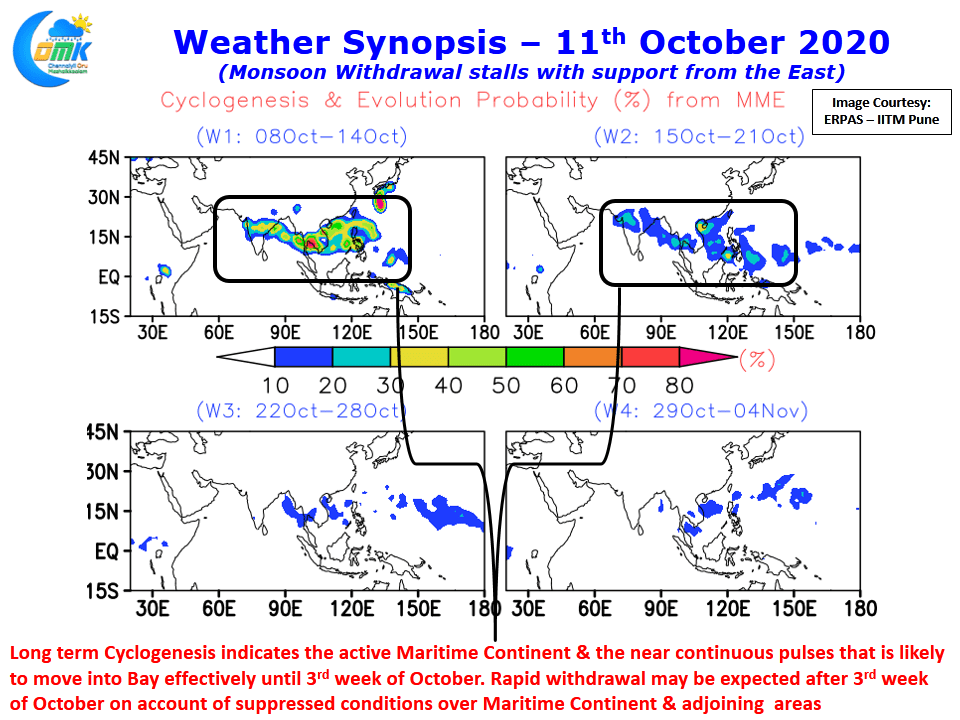 At the time of writing this post the buzz about Northeast Monsoon among the weather bloggers of Chennai will hit the roof with plethora of charts being shared about which day is likely to be the onset day as more often than not the onset window for Northeast Monsoon starts coming within the time frame (0 – 15 days) of operational weather models. This year though a plethora of charts are being shared most of it is being shared in the hope of trying to find a ray of light amidst the gloom of a parked Southwest Monsoon Withdrawal.

In sync with the recent times the bloggers can blame it on China for this situation of Monsoon withdrawal suffering a lockdown. An active Maritime Continent on the back of favorable MJO that is near stationary over the region has been sending pulse after pulse from South China Sea. Even in the revised Onset & Withdrawal dates by yesterday most of Maharashtra should have seen Monsoon withdraw. Instead we are yet to see monsoon withdrawal even touch Maharashtra borders.

Going by the charts it appears not much movement can be expected for the next week to 10 days as the IMD cyclogenesis indicates an active period for Bay to continue for the next few days. But if one were to look little deeply the current situation will eventually turn positive for NEM as well. In the coming days ITCZ will slowly move South and an active Maritime continent will eventually help Tamil Nadu when the pulses start moving at a lower latitude compared to the current context. We will have to bide our time till then but indications are once the current active spell over Bay ends we may see a rapid withdrawal of Southwest Monsoon around 3rd week of October.

The Well Marked Low now currently lying over Central Bay is expected to become a depression and move further W/NW towards North AP Coast. With its movement wind charts indicate the convergence zone is gradually shifting up reducing the thunderstorm possibilities over Tamil Nadu. As is the case always Chennai gets its best spells when rest of Tamil Nadu remains quiet, lets hope between today & tomorrow that day happens.