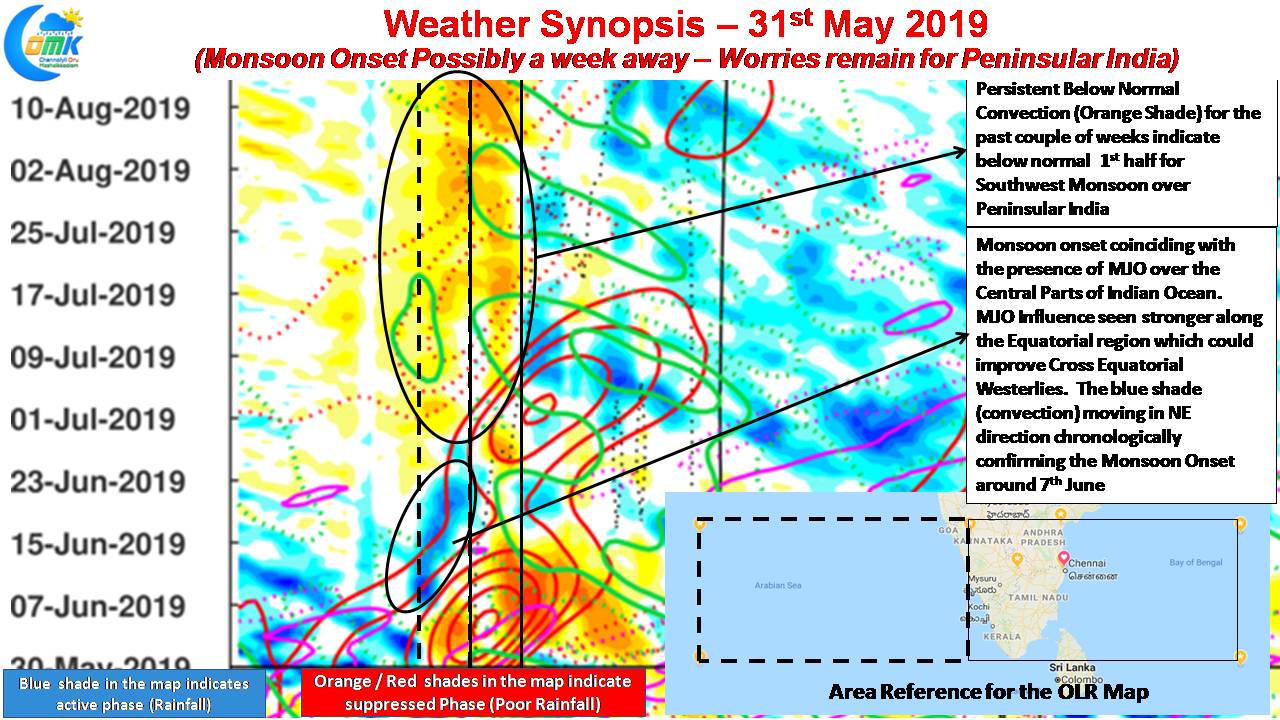 Since Precipitation charts / Precipitation Anomaly Charts beyond 5 – 7 days may not accurately reflect the synoptic factors we will lean on the OLR charts to make these inference posts while using Numerical Weather Model outputs for any immediate time frame inferences. Through today’s post we attempt to answer one of the most important questions running in everybody’s mind.

When will Southwest Monsoon Onset over Kerala?

Going by wind charts as things stand it appears we may see most of Sri Lanka come under Southwest Monsoon 3 / 4 days from now. Normally Sri Lanka tends to see Monsoon onset 7 to 10 days prior to the onset over Kerala. Additionally if one were to look at the wind pattern over the Indian Sub Continent at an altitude of 3 kms ASL we can see an East West Shear Zone type of wind pattern 10 days from now. Normally East West Shear Zone pattern is an indication of Pre Monsoon Onset conditions. It is pertinent to also note here according to IMD Westerlies should prevail up to a height of 4.2 kms ASL from Equator to just short of Madurai Latitude as part of the criteria to announce monsoon onset over Kerala.

Now for the second part of the inference on a slightly longer time frame. As with any long term inference these are bound to change as things evolve for the good / bad. This is just an indicative inference for those who would like to have some assistance in making long term planning. The OLR maps indicate aided by the passing of M JO over the Indian Ocean Monsoon onset could happen around second week of June. Subsequently it could move into Maritime Continent / West Pacific which is likely to bring a suppressed phase over Indian Sub Continent. This could mean as far as Peninsular India goes we may see a sub par start to Monsoon and a below normal trend during the 1st half of the Monsoon season.

In the event MJO stalls / slows down over Indian Ocean that could turn the entire equation to our favor, lets hope Nature answers the prayers from all of us