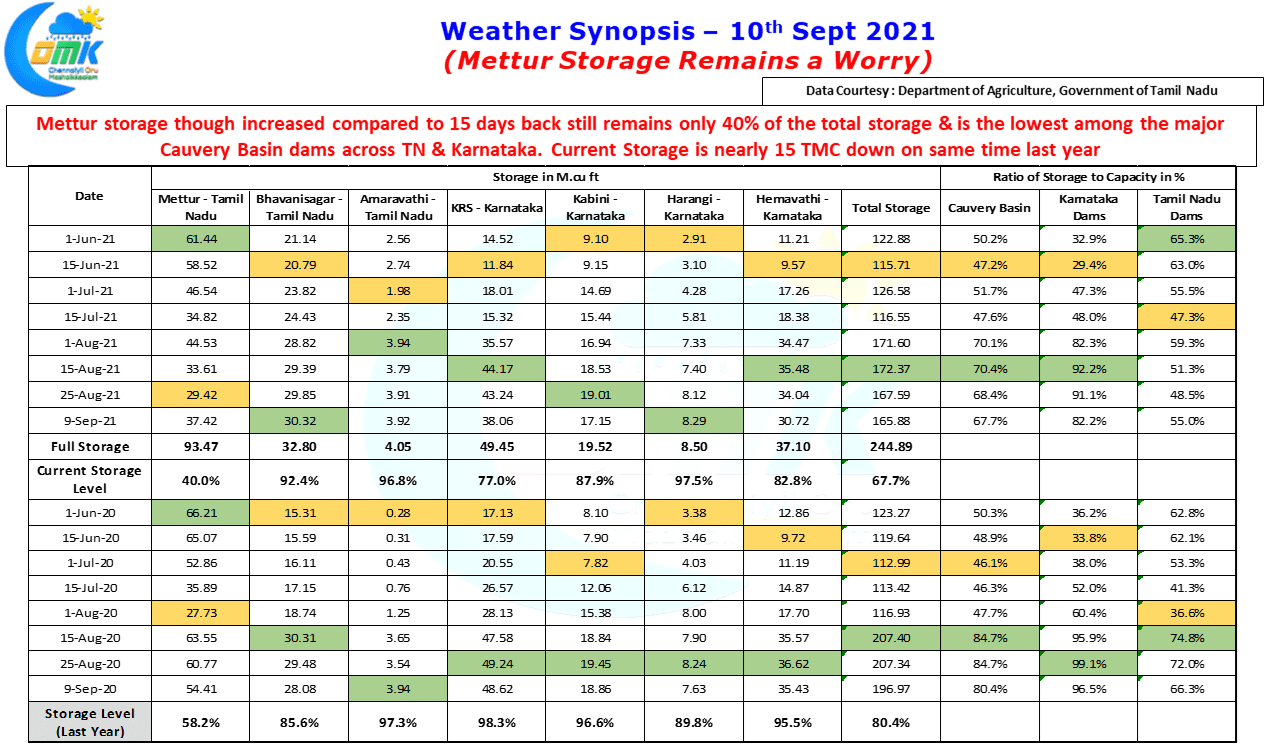 With roughly 3 weeks left for the Statistical Southwest Monsoon season to end the current storage of Mettur continues to remain a worry. For the past couple of years Mettur has seen the dam shutters open for Kuruvai Crop in the Delta districts on the traditional date of June 12th. To give a perspective prior to 2020 the dam was opened on June 12th only during 2008 with the intervening periods regularly seeing delayed opening due to poor storage at Mettur when the traditional irrigation year starts on 1st of June. As a matter of fact since Mettur dam was constructed nearly 90 years back only on 17 occasions including the current year the dam shutters have opened on the traditional opening date pretty much indicating the importance of building storage during the previous irrigation year.

This storage management is an extremely complex task for the water managers because not only it is dependent on the rains during Southwest Monsoon but also on the performance of post monsoon thunderstorms & Northeast Monsoon as well. If the period between late September to end December sees regular rains in Delta dts the requirement for water from Mettur may be lesser. It is in this context it becomes crucial to keep not only a tab on the current storage but also what could be the prospects ahead as well. With only about 40% storage of the total capacity & nearly 15 TMC down on last year’s storage at same time we might need some help from Nature to manage the storage to ensure next year there are no major issues in once again opening the dam shutters around the traditional date.

The entire cropping cycle in the Delta dts revolves around the opening date of Mettur as the first crop Kuruvai which is a short term crop is sown around the opening date of the dam with farmers hoping water through the Cauvery will help the crop. After the Kuruvai crops are havested around August / Samba is the longer & more popular & Important Samba Crop which gets harvested late December / January depending on the sowing time. Some areas go for a third crop depending on water availability & their cropping cycle after Pongal which gets harvested just as summer picks up. With the entire sequence revolving around the water availability at Mettur it has also become a sensitive issue.

With weather models indicating a moderate possibility for flooding over the Cauvery Basin we might possibly add another 10 TMC or so net storage to Mettur by the end of Southwest Monsoon Season making a good Northeast Monsoon more imperative with each passing day. Here is hoping the farming communities’ prayers are answered.