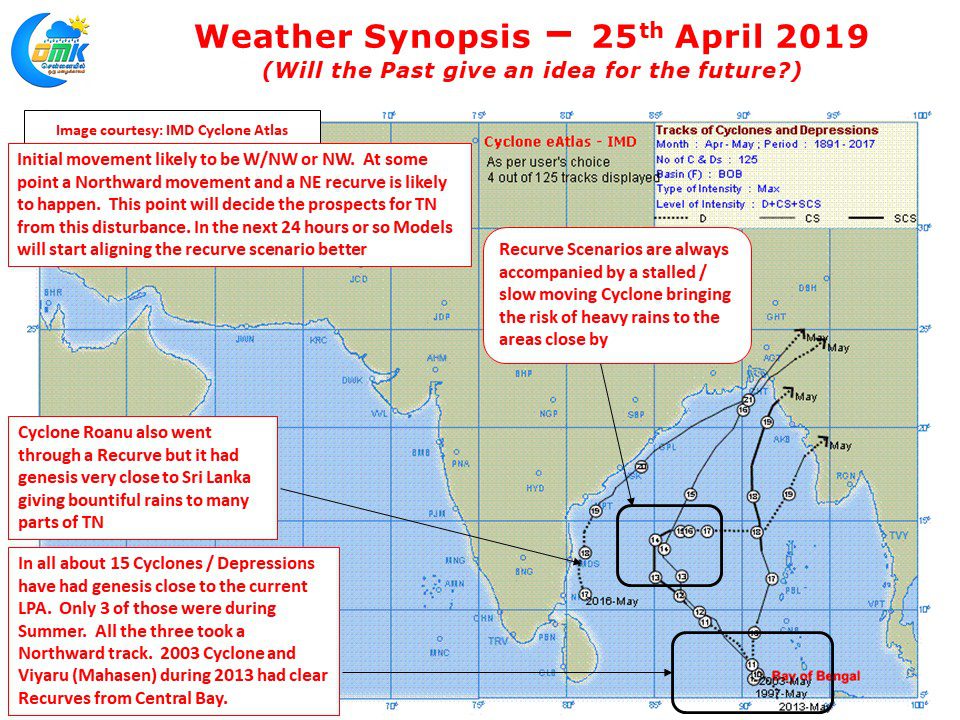 In what is going to be a nail biting journey for not only weather bloggers but media & public as well, the Low Pressure Area has formed in Equatorial Bay very close to the Equator. This is the first step in this journey towards what is likely to be a very strong Pre Monsoon Cyclone. There are going to be many twists and turns ahead in what is going to be a windy road to a destination we have no clarity yet.

The Equatorial region is showing massive building of convection with 4 tropical disturbances. The LPA & its Cross Equatorial sibling in the Southern Hemisphere continues to remain connected through an umbilical cord. This scenario was seen during Phethai as well when the two disturbances stayed close to equator on either side for a day or two before going on their respective journeys. Similar scenario is likely to happen now as well with the systems likely to start their journey in the next 24 hours or so. Once the North movement starts Consolidation will pick up and along with it an increase in intensity as well. There are a few points which one needs to keep in mind as far as Pre Monsoon systems are concerned.

While past is no guarantee to future especially with weather. It will certainly give an idea on what is likely to be the pattern. Pre Monsoon systems tend to follow a pattern as explained above. This one also is likely to see a recurve at some point of time. This point of recurve will decide the potential impact for Tamil Nadu. Cyclone Roanu in 2016 formed much closer to Sri Lanka giving bountiful rains while travelling along the Coast of Tamil Nadu before recurving towards West Bengal. The three closest analogs with the current genesis point all have taken a Northward path, the recent one being Cyclone Viyaru.

Over the next day or so models will align the recurve scenario better. Till then COMK will not jump the Gun especially in the context of our failed Cyclone Phethai inference. Sit tight. Its going to be an exciting journey with hopes of rewards as well in the form of rains but it will test your patience and the wait will be worth the efforts in terms of learning.