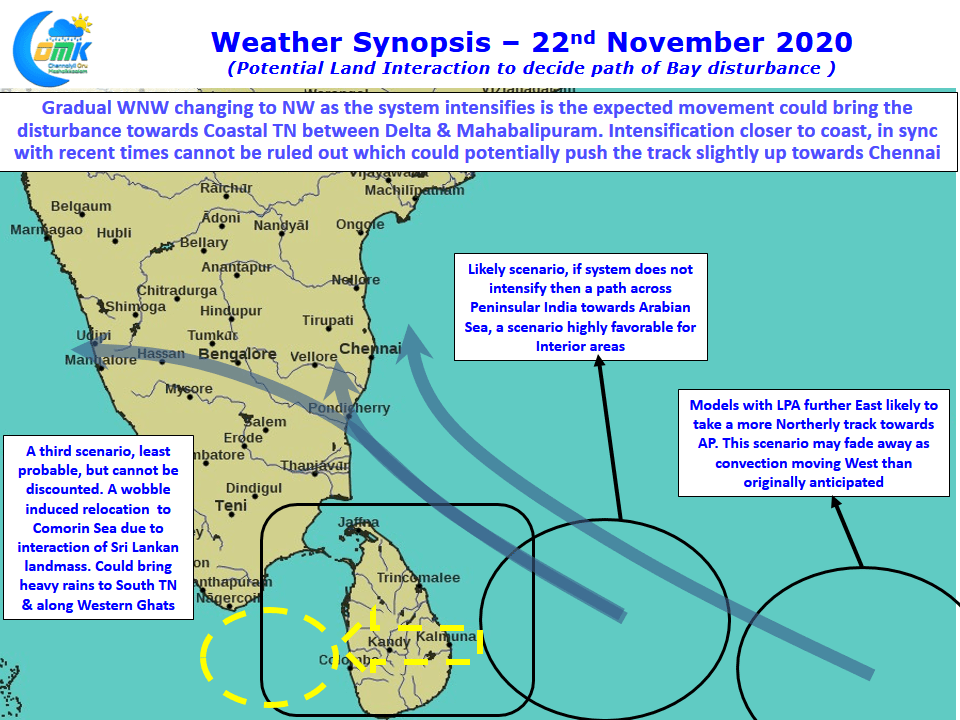 IMD confirmed the formation of low pressure area over pay of Bengal yesterday well in advance of the original e estimated date of 23rd November. It is always very difficult to to accurately estimate cyclone paths in a closed basin like Bay of Bengal. Additionaly larger factors like Indo China Ridge or Indo Arabian Ridge which play crucial roles in the steering of cyclones over Bay of Bengal and Arabian Sea give complications while estimating the track. One should also not forget the presence of Western disturbance or mid latitude westerly graph which brings in a different set of dynamics to the cyclone path as well.

Keeping all this in mind we can possibly make a reasonable estimate based on current condition and model estimates. In the current context there is one key element which cannot be discounted, the land mass of Sri Lanka, which could completely change the Dynamics of the current low pressure persisting to the east of the island Nation. In our opinion the general movement of the current disturbance is expected to be West Northwest initially gradually changing to Northwest as the system intensifies.

Looking at how the model estimates in comparison to the current conditions today morning a majority of the models seem to have the low well east of the current condition. This development means some of the more northerly tracks estimated by a few models look less likely to happen. Taking into account the current location of the low pressure area as estimated from satellite images it appears the the most likely probability could be e a West Northwest moment brushing the north eastern coast of Sri Lanka towards coastal Tamil Nadu in the next couple of days.

All in All the entire coastal stretch between Rameswaram & Nellore has to be on vigil for heavy to very heavy rains between Tuesday & Thursday depending on the movement of the disturbance which could make a landfall over North TN coast as a moderate cyclone.