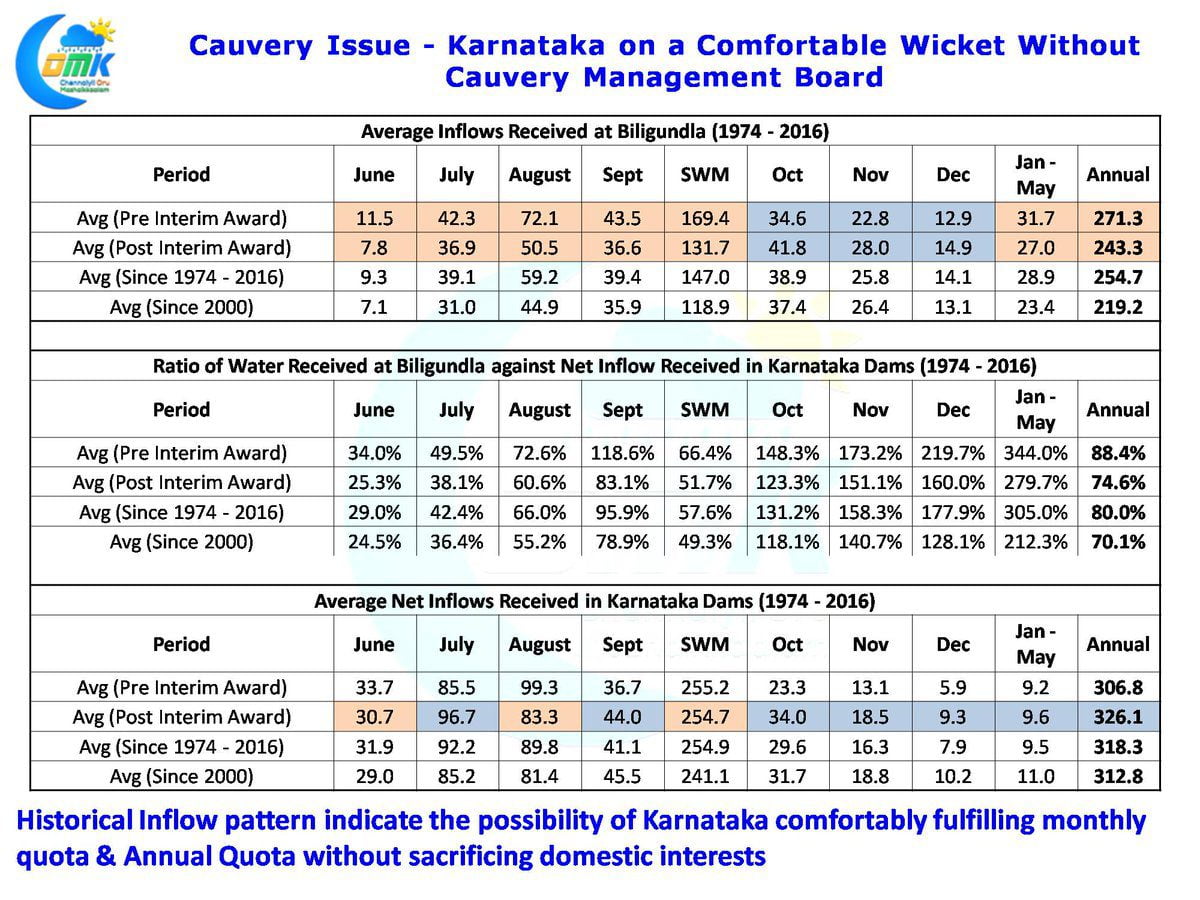 On a day when the Supreme Court is expected to hear on the Cauvery Issue Petitions filed by Tamil Nadu & Union Government we try to understand why Karnataka has been vehemently opposing the formation of Cauvery Management Board as a permanent solution to the dispute. On the one hand a lot of emotional outburst about how Karnataka does not part with water at all while the view point on the other side is water can be provided after satisfying domestic needs. 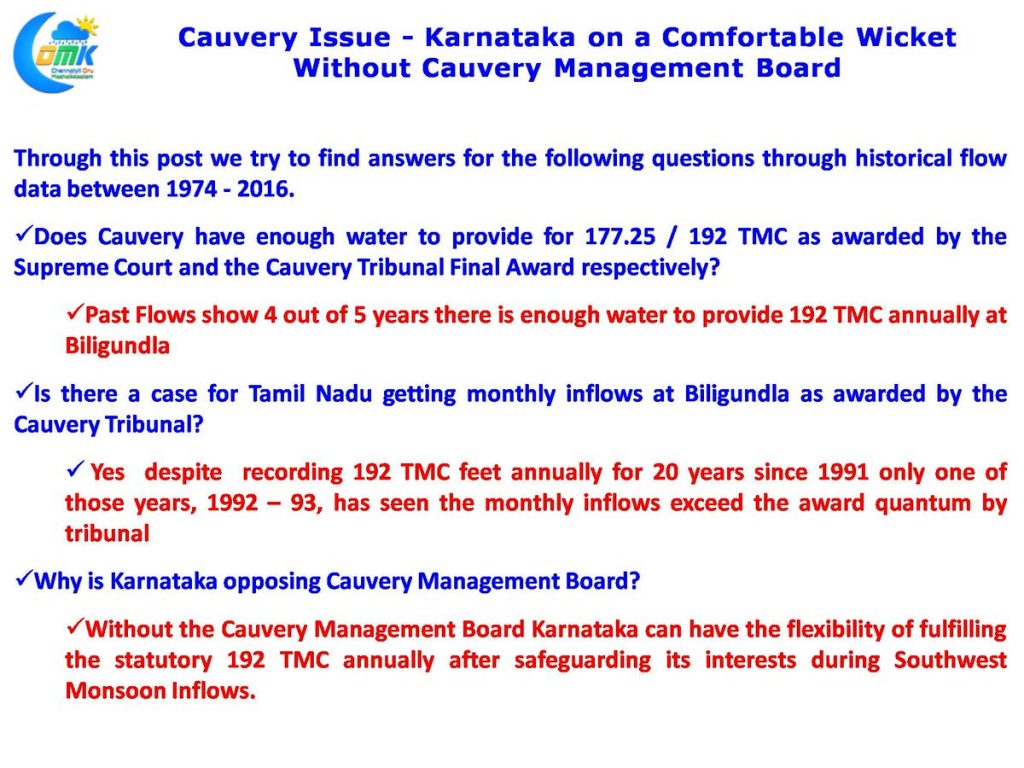 As is the case always with the Cauvery posts we provide a Pre & Post Interim Award scenario to provide a clearer picture. If one were to look at the past historical flow data since 1991, the year Interim Award was given, 4 out of 5 years has seen Biligundla record 192 TMC quantum as prescribed by the Tribunal. 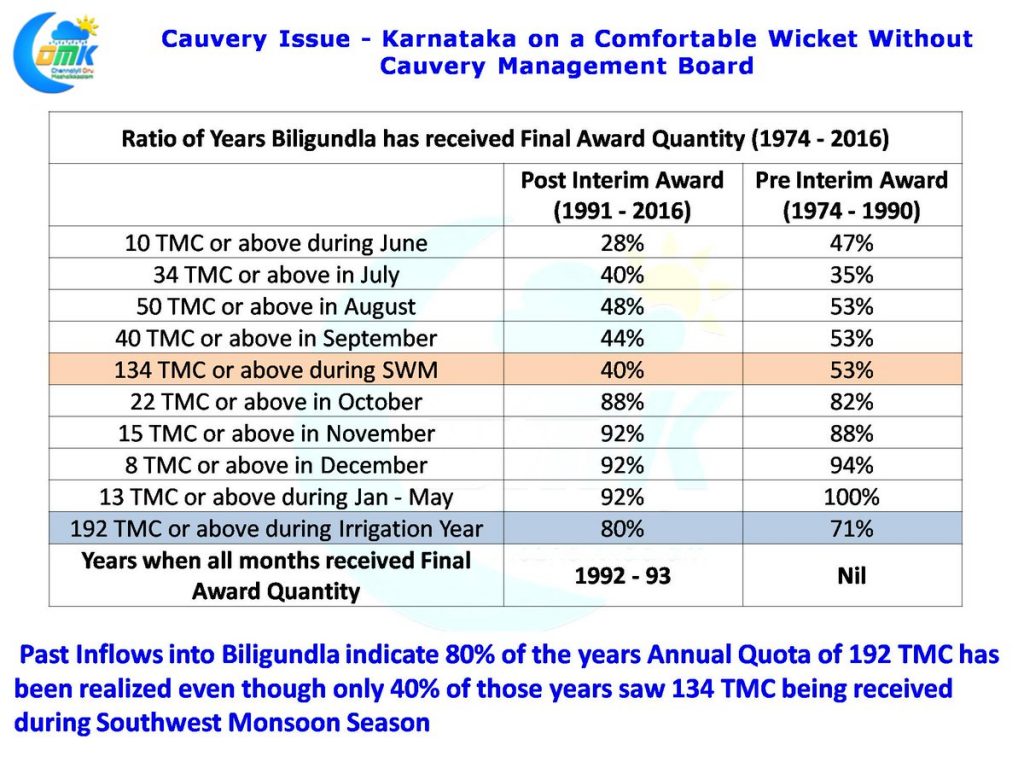 Interestingly the Supreme Court has now revised this quantum to 177.25 TMC. While there is bound to be distress years in between overall the dynamics are fairly skewed for this quantum to be provided on a year on year basis. But the key here is only 40% of those years have seen the inflow at Biligundla exceed the quantum prescribed by the Tribunal

If one were to compare the average monthly inflows it appears there is a case for Karnataka to share their monthly inflows with Tamil Nadu without sacrificing their domestic interests. Here once again its very obvious subsequent to the interim award there has been a change in the water storage pattern by the Karnataka Water Managers. The annual inflow into Biligundla has reduced during the Post Interim Award Period compared to the Pre Interim Award period which is in line with the reduction in share of TN from the overall basin as estimated by the Tribunal. To summarize historical inflows indicate a majority of the years the Cauvery Basin will have enough water to provide for the 177.25 TMC awarded to Tamil Nadu by the Supreme Court Final Verdict. There is a change in water inflow & storage pattern at Karnataka which has increased the post monsoon inflows into Biligundla. This needs to be taken into account by Tamil Nadu for a possible realignment of Cropping Pattern.