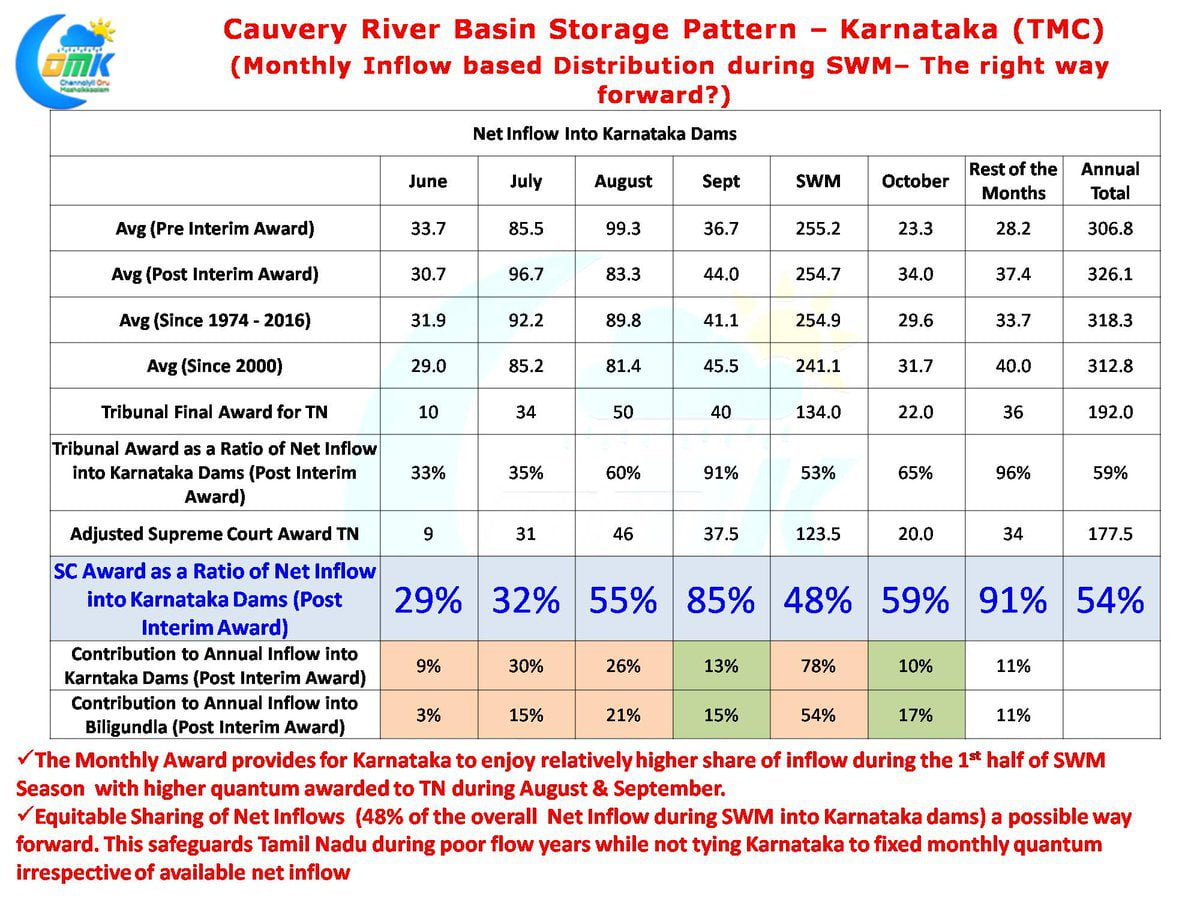 The Cauvery Issue has once again become a Topic of Discussion in the country with the 6 weeks deadline set by the Supreme Court for implementing the “Scheme of Distribution” passing. The subsequent events indicate how the fortunes of the river is an emotional connect to the people of Tamil Nadu & Karnataka. We at Chennai Rains blog have been in the past made posts on the changing scenarios and how Prudent Long Term water management is the need of the hour. 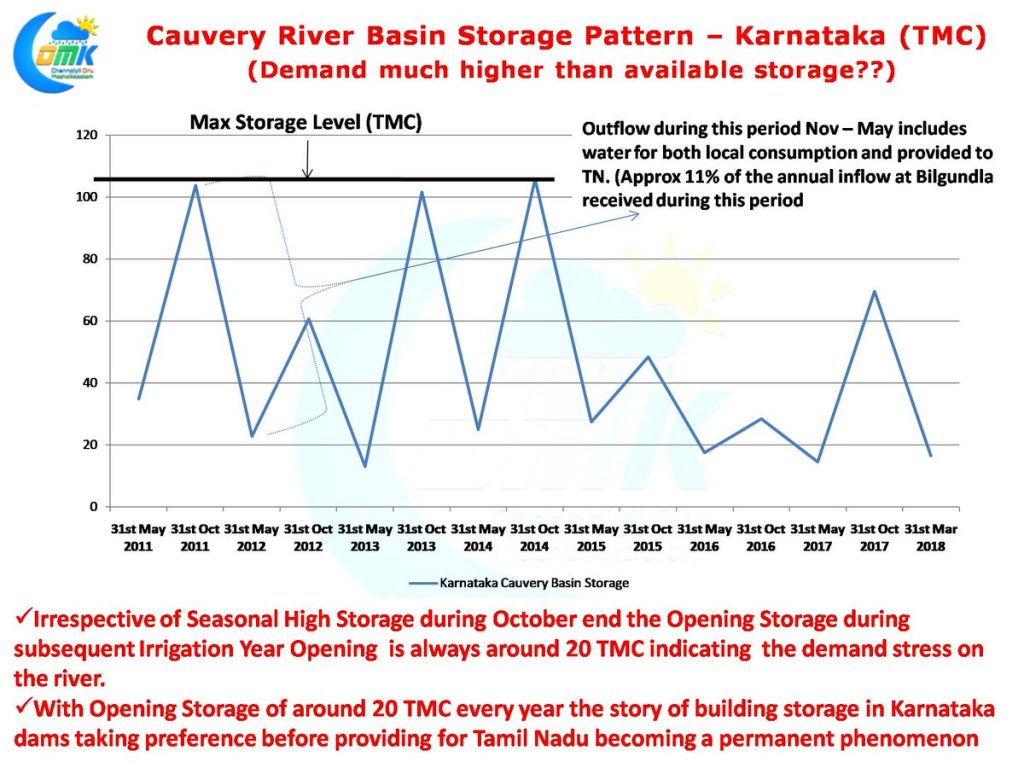 In this post we try to search for a few answers to this Cauvery Puzzle and possibly a humble suggestion from our side on what could be the way forward, If one were to look at the storage pattern in the Karnataka reservoirs over the last few years it is becoming fairly obvious the off season demand is possibly putting a lot of stress on the river with the opening balance during every irrigational year ends up around 20 TMC even if the storage during October end is nearly at Full Storage levels.

This makes “Building Storage before Sharing” a near permanent phenomenon. But perhaps the more worrying trend is Tamil Nadu becoming a pseudo “Flood Control Reservoir” if one were to look deeply into the inflows at Biligundla. Regular observers will agree the entire Cauvery Issue could be treated as two different periods “Pre & Post Interim Award Periods” It is an irony that nearly half of the Best & Worst Years of Inflow at Biligundla has happened in the Post Interim Award Years and possibly exposes the dichotomy of Karnataka water managers as well. If River Cauvery decides to give a bounty to Tamil Nadu it becomes obvious the water managers of Karnataka are powerless to stop. Unfortunately during bad years the deficit flow during Southwest Monsoon period does not get recovered during the balance months for 7 out of 10 years. In this context it becomes essential we look beyond a Fixed Monthly Quantum. The Monthly Tribunal Award has been a fair assessment based on the average Net Inflows into Karnataka dams providing an opportunity for Karnataka to build some storage during the early monsoon days and provide for Tamil Nadu a reasonable quantum at the same time with increased quantum prescribed during the second half of the monsoon. With nearly 70% of the annual inflow award of 177.25 TMC into Biligundla factored between June & September the net inflow into Karnataka dams & the inflow at Biligundla should relatively mirror each other in terms of overall contribution which is not translating into reality. 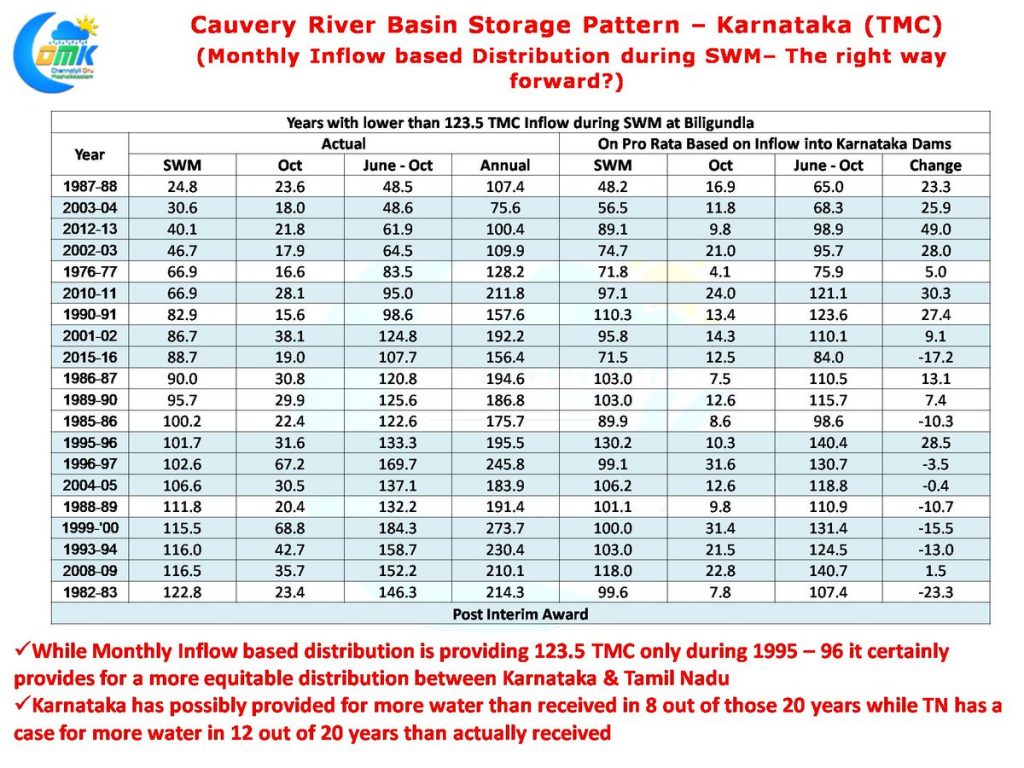 The water managers at Karnataka seem to adopt a Domestic Safety policy with subsequent releases during September & October well in excess of what the dams in Karnataka get during the same period. During years when the fag end of Southwest Monsoon is poor it affects the overall annual inflow into Tamil Nadu making it a case of “வெந்த புண்ணில் வேல் பாய்ச்சுவது” Hence it becomes relevant to opt for an Pro Rata Inflow based sharing system thereby equitably distributing the waters between the two states & ensuring the two neighboring states not only share the bounty but also the distress equally. The long term average contribution of the months to the annual flow is a good indicator of how we could divide the water. Not only it will ensure a meaningful contribution for Tamil Nadu during bad years it will also not tie Karnataka to a fixed quantum irrespective of the inflow. 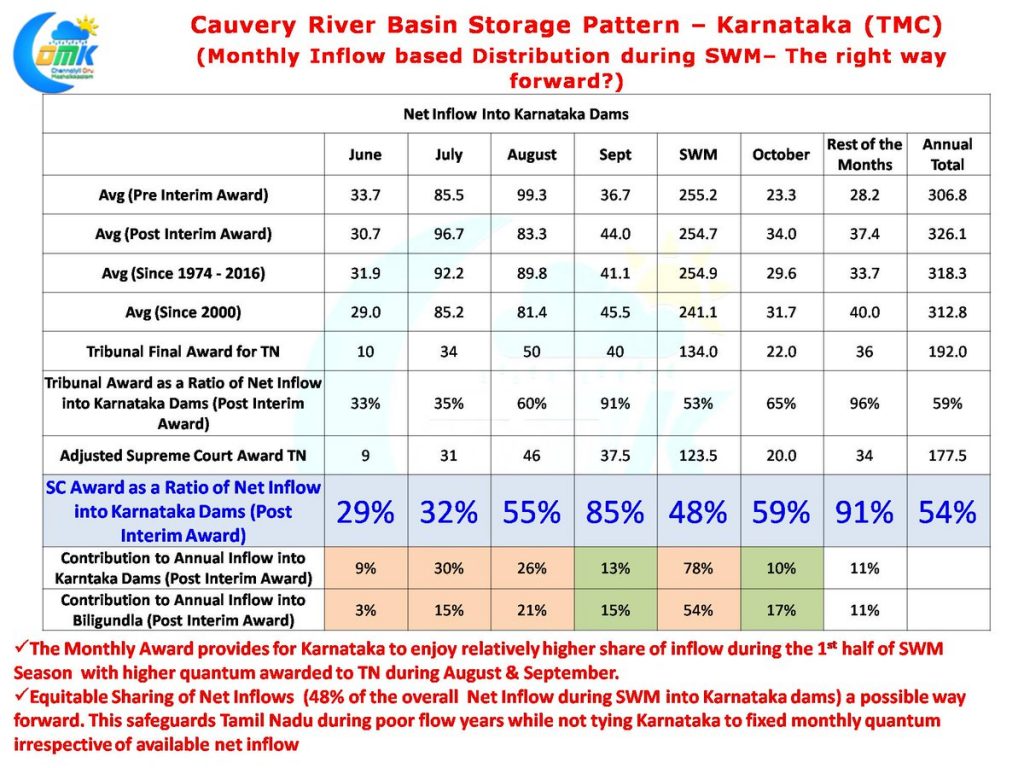 The objective of this formula is not to provide 123.5 TMC during SWM or 177.5 TMC annually for Tamil Nadu but it provides for a more equitable distribution of water. As indicated by the chart nearly 8 out of the 20 poor inflow years Karnataka has provided higher water to Tamil Nadu than what the inflows for that year warranted. Similarly Tamil Nadu has a case for getting more water in 12 of those 20 years though only 1 year (1995 – 96) provides for 123.5 TMC during Southwest Monsoon. This Inflow based Distribution will be a case of Give and Take between the states and what is provided by Mother Cauvery is shared proportionately between the two siblings Karnataka & Tamil Nadu while providing for adequate support to the the other two siblings Kerala & Puducherry as well.