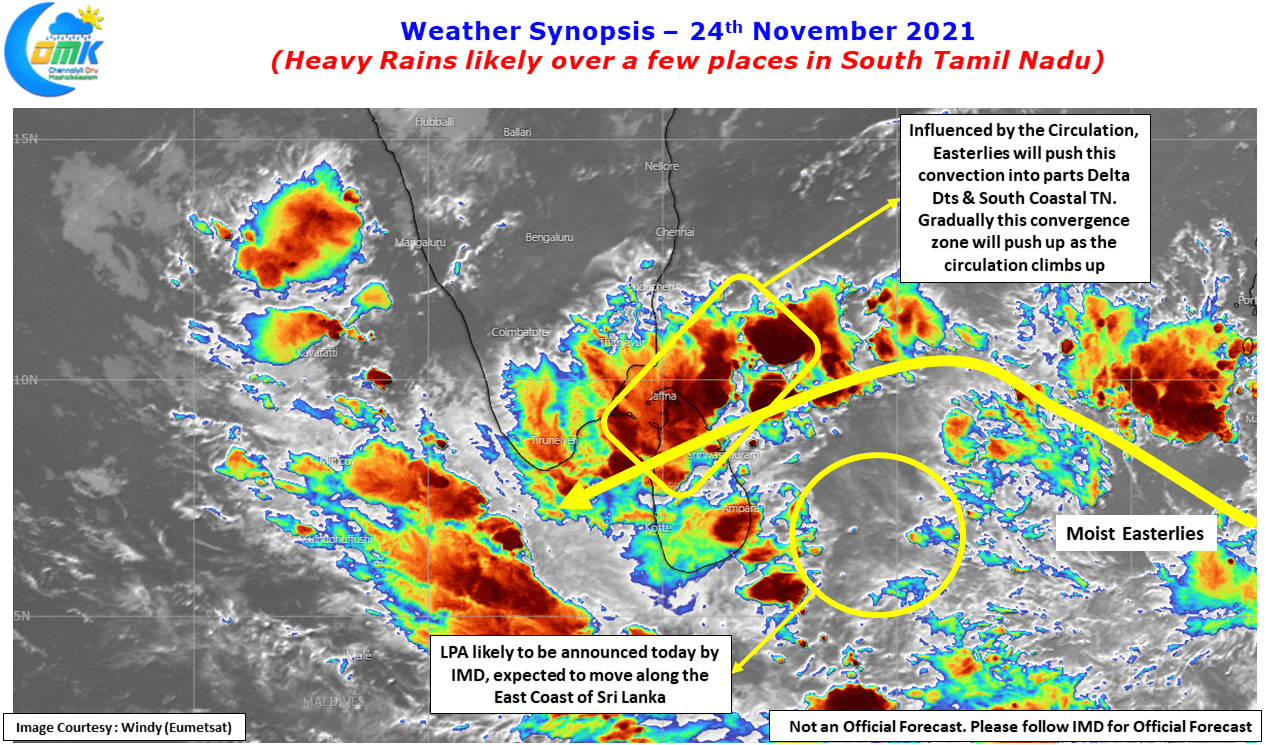 The last couple of days should have come as a welcome relief for people from North Tamil Nadu as drier Northerly winds influenced Weather over places like Chennai & surrounding. At the time of this post it is nearly 48 hours since Chennai received a noteworthy spell of rains. Though weather models indicate rains to return in about 24 to 36 hours time it is pertinent to point out every dry & sunny day we get will surely give us some benefit in terms of water percolation when the next spell of rains happen.

Satellite image indicates it is only a matter of hours before IMD will announce the formation of Low Pressure Area from the UAC now seen to the East of Sri Lanka. It is likely to form to the ESE of Sri Lanka and gradually move up along the East Coast of Sri Lanka which is likely to push the wind convergence zone, gradually North, seen over South TN today. Today’s wind chart is a perfect specimen of wind convergence with vivid colorful representation of the dry & moist winds moving in. As the circulation strengthens it will aid the Easterlies & push up the drier Northerlies, sending the convergence zone as well moving up along the coast of Tamil Nadu.

The next few days potentially gives two worries for Coastal Tamil Nadu. The first worry is the wind convergence which was explained above could potentially provide for heavy rains over few places of Coastal TN under the right conditions over the next 2 or 3 days. This is likely to happen between delta & Chennai depending on localized conditions & the movement of LPA over the next 24 to 48 hours.

The larger worry though is the consistency developing among weather models about the LPA moving to GOM in a couple of days time which could potentially trigger a stall scenario as the land mass on either side reduces the play available for a disturbance to move in GOM area. This stall / slow movement scenario would mean one patch of Coastal TN around 50 to 100 kms wide could end up witnessing heavy to very heavy rains over a period of many hours due to the near stationary wind pattern recycling moisture constantly.

Looking further ahead this pulse is likely to be once again moving East to West across Peninsular India into Arabian Sea potentially once again triggering moderate to heavy rains over the Interior parts of South India. Unlike the earlier two disturbances which moved closer to 13N this one may move along 10N latitude which means the impact areas could be slightly to the South of the earlier two instances though River Basins like Penna, Palar, Pennaiyar & Cauvery need to be cautious.

Today we might see rains continue in South TN over many places with isolated places along the coast in Pudukkottai, Sivagangai, Ramanathapuram & Thoothukudi may see heavy rains. Delta could seen an increase in rains from later tonight early tomorrow morning. Chennai & surrounding areas may witness another sunshine day, possibly the last day for a week or so.