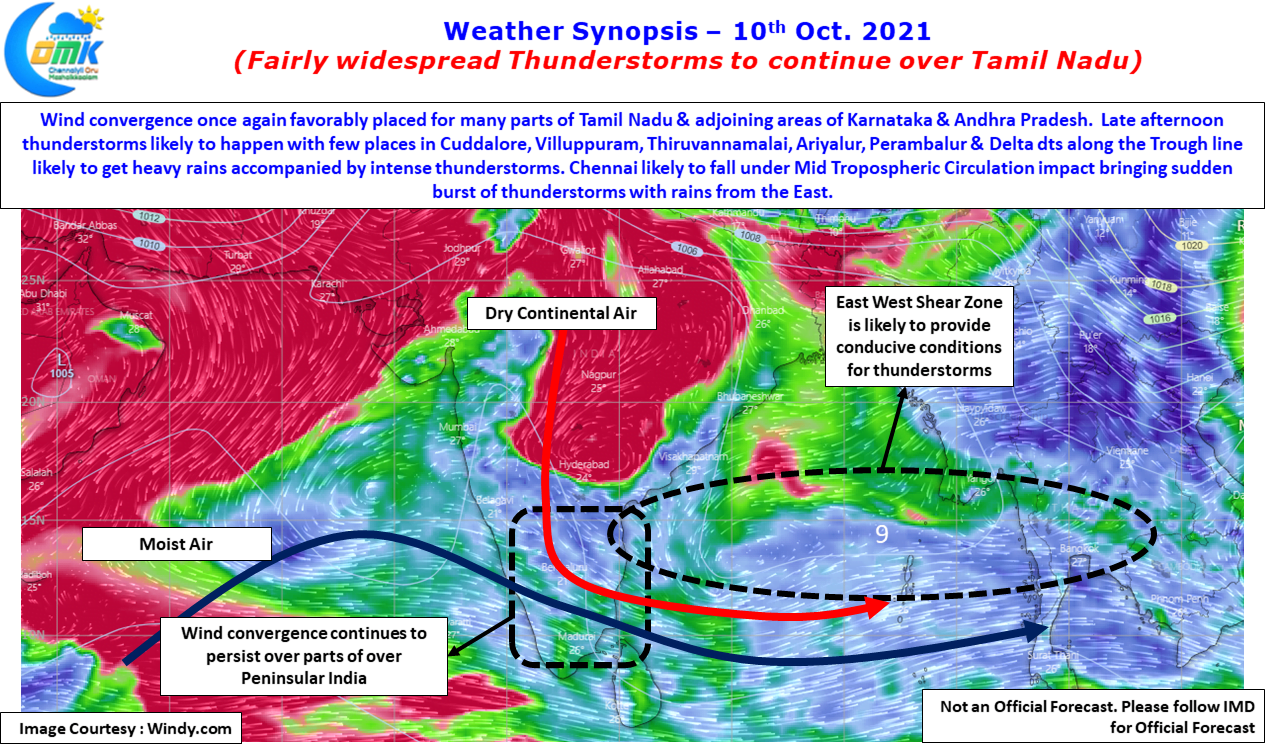 With the 1st ten days of October gone, the Northeast Monsoon seasonal rainfall accumulation for this year is at 87.1 mm for Tamil Nadu & Pondicherry Sub Division. This is roughly 1/5th of the seasonal Northeast Monsoon total and nearly 50% of the October long term average rainfall which is 177.6 mm for the sub division. To give a perspective October 2020 saw a total of 101 mm while the rest of the two months of Northeast Monsoon 372.6 mm which was nearly 100 mm more than the average for these two months. While weather bloggers continue to put every run of every weather model available under the lens to identify possible Onset period for Northeast Monsoon thunderstorms have been pushing up the rainfall meter without any fuss & it would not be a surprise if October ends up above average without Northeast Monsoon making onset at all.

Meanwhile atmospheric wind instabilities continue to persist favorably for southern parts of Peninsular India in the form of wind convergence & ideally located East West Shear Zone over Central Bay. This is likely to provide for another fairly widespread day of thunderstorms over parts of Tamil Nadu & adjoining areas of Karnataka & Andhra Pradesh. In the meanwhile Kerala & places along the Western Ghats of Tamil Nadu will also see increase in rainfall activity with few places in line to receive heavy spell of rains due to moisture drag created by the East West Shear zone from the Arabian Sea.

Places in interior Tamil Nadu, particularly along the trough line, over Tiruvannamalai, Villuppuram, Cuddalore, Ariyalur, Perambalur, Pudukkottai & delta districts will see few places come under intense thunderstorms accompanied by heavy spell of rains through slow moving storms. Chennai saw sudden burst of thunderstorms for the last couple of days through localized developments which meant while some areas came under heavy spell of rains like Triplicane & Marina which saw nearly 10 cms of rains in a matter of one hour while places to the west like Anna Nagar was practically dry for the entire period of thunderstorm activity around Chennai.

Today though wind charts indicate Chennai along with rest of North Coastal TN may come under the influence of Mid Tropospheric circulation over the Bay. This could mean there is a possibility storms may come in from the East which could improve the prospects of rains for more areas. While few areas will continue to get the sudden burst of rains through localized developments, the support at Mid Tropospheric levels mean more areas could come under rains.