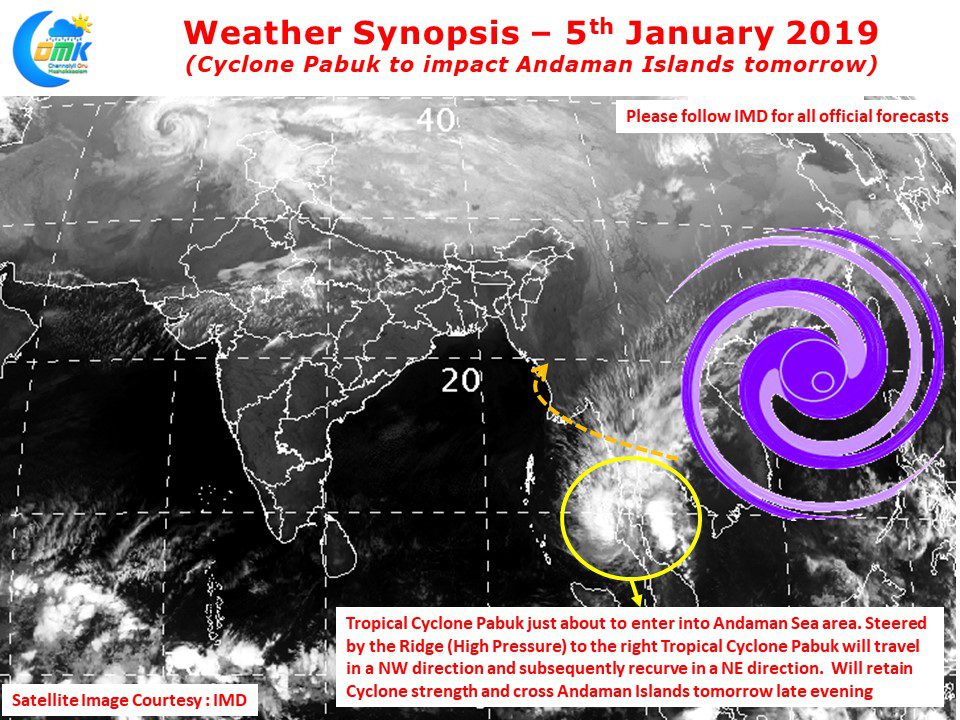 In what will be only the 8th instance of a cyclone in Bay of Bengal during January Tropical Cyclone Pabuk is expected to cross into Andaman Sea in a few hours from now after making landfall over Thailand coast yesterday evening.

The last few days have seen places like Udhagamandalam, Valparai, Munnar in Western Ghats witness cold wave like conditions as night time minimum temperatures have plummeted in the high altitude regions of Tamil Nadu & adjoining parts of Kerala. Severe Ground frost conditions have been reported from Ooty & Munnar while Valparai has reported sub 5°C for the past three days. These conditions are likely to persist for a further couple of days going by model outputs. Most of Tamil Nadu has been seeing below normal night time minimum temperatures which will continue until early next week.

While Tropical Cyclone Pabuk has lost a lot of convection due to the land interaction it continues to retain the core and will possibly retain cyclone strength while moving into Andaman Sea making it the 3rd earliest cyclone to happen in Bay of Bengal during a calendar year after two depressions that intensified into Cyclones on 5th January during the year 1929 and 1967. With the sea conditions not very conducive no major intensification is expected of Tropical Cyclone Pabuk as it makes a landfall over the Andaman Islands tomorrow late evening

Guided by the Indo China Ridge to the right of the cyclone it is likely to track in a Northwest direction initially slowly moving into a more pole-ward direction and then recurve towards Myanmar in a NE direction under the influence of the incoming Mid Latitude Westerly Trough a couple of days from now. During this process of NE recurve it is likely to lose its intensity and structure making it drift as a weak system towards Myanmar carrying a lot of rains along with it.