Critical 24 – 36 Hours Ahead for Kerala Floods

Each passing day Kerala Floods is becoming one of the biggest disasters the state has faced for the past couple of generations. While some of the older generation including our own weather blogger from Trivandrum may have faint memories of the 1961 floods which was possibly the second worst in the last century, 1924 possibly seeing the worst, the same year when Cauvery also carried its highest recorded flow of nearly 4.5 lakh cusecs. Early rainfall numbers available as of 5:30 AM today morning indicate fairly heavy rains have been recorded in Thrissur & Palakkad districts while moderately heavy rains have fallen over parts of Wayanad, Kozhikode districts. In all probability when the more detailed rainfall report gets available from IMD we will possibly see Malappuram, Pathanamthitta & Idukki districts also record high numbers. The convergence chart pretty much confirms the interplay between the Well Marked Low & the off shore trough. More often than not it is the off shore trough that develops triggered by the Low Pressure Area in North Bay that creates the heaviest spells of rains along the West Coast. 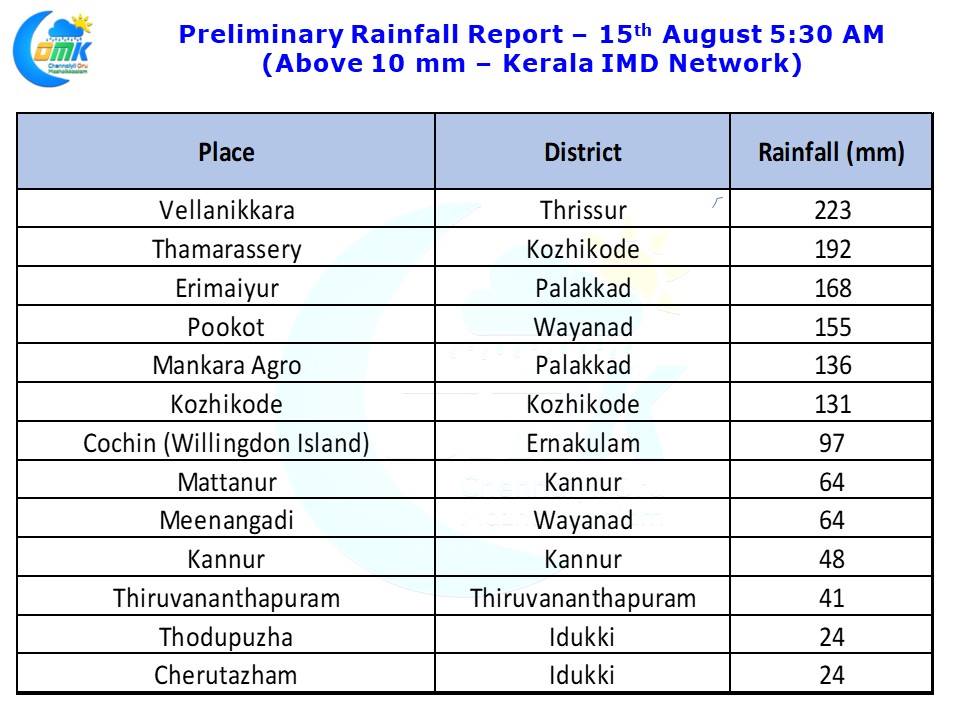 The last couple of days have seen a feeble off shore trough running along the West Coast from South Maharashtra & Kerala resulting in heavy rains in many places of the state and extreme rains along the Western Ghats. The current disturbance was pretty much stationary for more than 24 hours around the Odisha region the previous day, now it has weakened and started to slowly move in a West / Northwest direction. Consequent to this weakening and movement we are likely to see the off shore trough gradually climb up the latitude and taking the heavier spells of rains along with it to Karnataka & subsequently the Shahyadris of Maharashtra & Konkan coast. But before that the next 24 – 36 hours is likely to be another testing period for North & Central Kerala with rains likely to be moderate to heavy in many parts of the state with one or two places likely to see extreme rains in the Wayanad region. Places in the Ghats of South Karnataka are also likely to see heavy rains in many places until the weekend which could increase the swell into rivers like Cauvery & Kabini etc. As far as Tamil Nadu goes we are likely to see heavy rains continue along the ghats today and possibly some respite from tomorrow for places like Kanyakumari & Tirunelveli. From Sunday possibly there will be an appreciable reduction in rains for Kerala & the places along the Western Ghats in TN. Till then Kerala Floods will remain a very serious concern