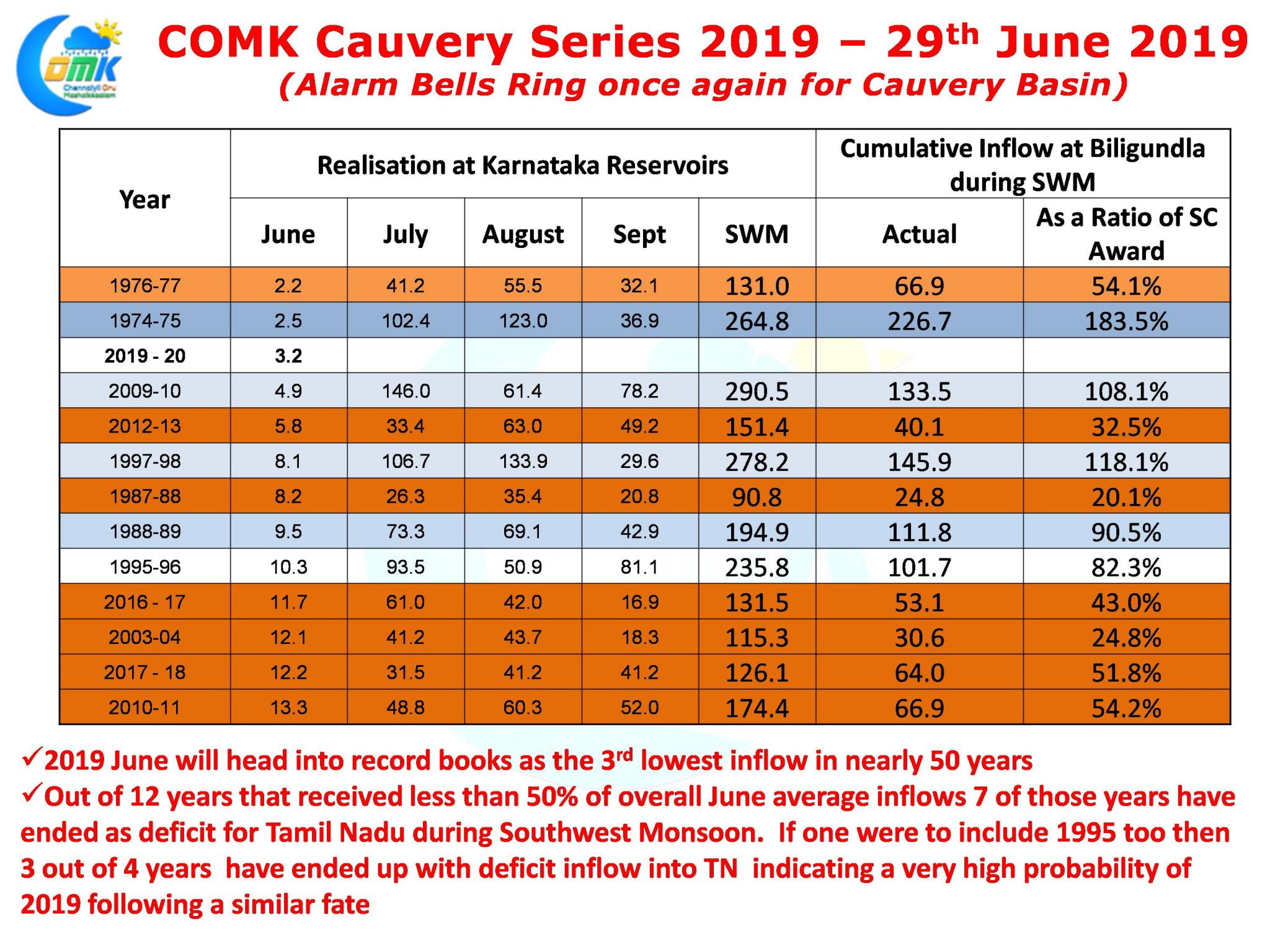 At COMK we take a lot of pride in the Cauvery series we put every year during the Southwest Monsoon period. Not only does it give us a sense of satisfaction when we try to interpret the inflow data to understand how the irrigation year is likely to shape up for the farmers of the Southern States of Tamil Nadu, Karnataka, Kerala & Pondicherry.

Last year was a historic year in every sense for the Cauvery Basin with the river seeing its highest ever inflow in nearly 50 years during Southwest Monsoon period. Kabini reached FRL before June end while Harangi followed in a few days time. By July 3rd week all the four dams in Karnataka & Mettur in Tamil Nadu reached Full Reservoir Level. Mettur reached FRL after August 2013.

Ironically within 12 months a drought like situation is seen over the Cauvery Basin indicating what is a much deep rooted issue with water management over the Basin. We have repeated often the traditional opening Date of Mettur, June 12th, is unlikely to happen 9 out of 10 years considering the storage in the reservoirs during the off season. This year a similar situation has evolved with the June inflows into Karnataka reservoirs accumulating to just 3.2 TMC at the time of this post. This is just about 10% of the Long term Average. If one were to look at the past records the current year’s inflow is the third lowest in nearly 50 years indicating the issues ahead of us.

While as weather bloggers we can always look at long term weather charts to give inferences & outlooks on what to expect at times looking at past history gives us an indication on the statistical probabilities. These statistical probabilities provide an indication on what to expect as a worst case scenario. Taking this into account we looked into those years when the inflow into Cauvery Reservoirs during June was less than 50% of the Long term Average Flow. Since 1974 12 years have seen lesser than 15 TMC Net Inflow during June and critically 7 out of those years have ended up being deficit for Tamil Nadu in terms of inflow during Southwest Monsoon. If one were to include 1995 – 96 as well then the probability of a deficit year is nearly 75%.

It is time the TN government starts taking action keeping in mind there is a more than 50% probability of TN not receiving its quota of Cauvery waters during Southwest Monsoon period. As a conscious call we have stayed away from looking at the Inflow details post Southwest Monsoon as it would just be an academic exercise of averaging the year. More over any water received post September is not going to help the Kuruvai Season in Delta districts while Northeast Monsoon remains the primary water provide during the subsequent Samba Season.

In this juncture it becomes imperative to think of ways & means to improve the efficiency in our usage of Cauvery waters. it becomes obvious through the rainfall pattern its a very highly erratic basin which sees more deficit years and with a few extreme excess years added in between. Unless we find a way to harness those far and few in between extreme excess years the cycle of political brinkmanship between Tamil Nadu & Karnataka