In a lesson showing Weather watching requires a lot of patience yesterday saw a case of ChennaiRains so near yet so far as thunderstorms teased & tormented not only the weather bloggers but a lot of the common public as well with rains brushing a few suburban areas of the metropolis while showcasing a sound and light show at many places. Nevertheless few places around the suburbs like Sriperumbudhur, Kanchipuram, Chengalpet etc indeed got fairly good rains. 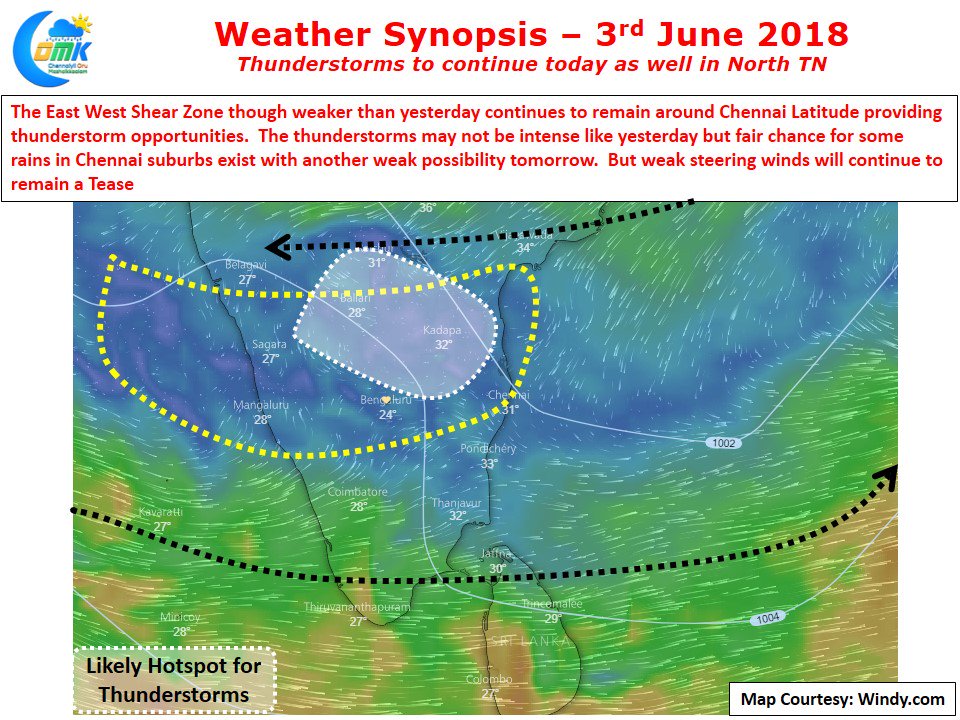 Yesterday we mentioned the presence of the East West Shear Zone at 3 kms ASL latitude as a key ingredient for the thunderstorms to develop around North Tamil Nadu and adjoining parts of Rayalaseema region of South AP. The thunderstorms developed right as per script estimated by models. Today also there exists an East West Shear Zone though its much weaker and tomorrow also it shows up in an even more weaker form. While today provides a decent chance for some thunderstorm activity over North Tamil Nadu with another Tease Show possibly for Chennai tomorrow represents a very weak possibility which we would not discount but will not count on it actively though. Places to the West & Northwest of Chennai possibly will once again see thunderstorm activity with suburbs of Chennai likely to see a spell or two of rains while city areas might still be touch & go. Models indicate an increase in monsoon activity over Kerala from today which is an indication of reducing thunderstorm activity in the days to come. This would mean possibly the thunderstorm window is coming to a close in the current phase for the interior parts of Tamil Nadu. But the good news with Westerlies streamlining when the next thunderstorm window opens in a few days time from now ChennaiRains will not be case of so near yet so far