The Low Pressure Area off the Sri Lankan coast is pretty much kissing the Sri Lankan shore as we speak.  It is almost at the doors of the South East coast. 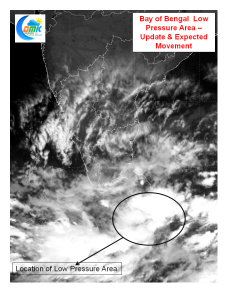 The next 12 – 24 hours when the Low Pressure Area is under the influence of Land Interaction.  As it moves in a North West Path over land some of the models expect it to take a North East Movement enter into the adjoining Bay of Bengal.  The next turn the low pressure area takes is going to be vital for its life, if it takes a left turn a combination of land interaction and less conducive environment to develop could hinder its growth thereby pushing it into the West.

If it takes a North East turn as expected by the models, Bay will provide a very good opportunity for it to pick up intensity once again move further north towards the coast of Tamil Nadu.  But the presence of HPA over Central India would prevent any movement further north of around 10N / 11N after which it would again take a Westward path over Indian peninsula .  We still think the Low Pressure Area would not take a path in the North East direction.

Till the low pressure completes its land interaction with Sri Lankan landmass rains for Chennai will have to wait.  The system has been moving slower than predicted.